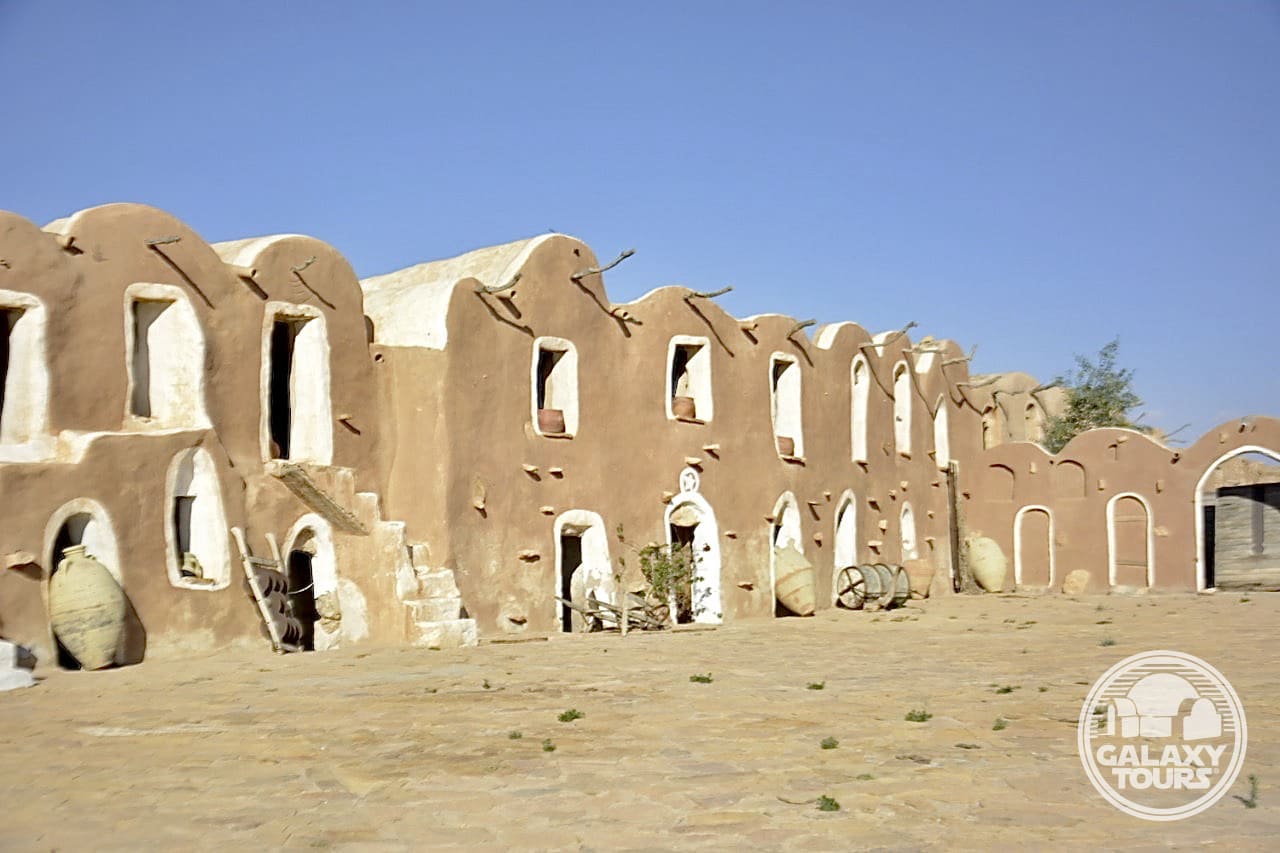 Ksar Ouled Debbab (alternately: Dabbab) is a small Amazigh village situated in the southern foothills of the Jebel Dahar mountain range approximately 9 km southwest of Tataouine city via the P19 highway in the Tataouine Governorate. The modern village shares the name of the ancient ksar, which forms the southern perimeter of the village.

Ksar Ouled Debbab is the largest ksar founded by the Amazigh Ouled Debbab tribe, which settled in the region in the early 18th century CE. The original (northwest) courtyard, formed like an irregular amphitheater (70 x 65 m), dates to approximately 1760. The ksar, associated with at least six different Ouled Debbab clans, was later extended some 230 meters to the southeast in the shape of an elongated, increasingly narrow courtyard with a single exterior entrance placed at the southeast corner of the site. The size of this architectural expansion denotes periods of significant local economic development and population growth requiring a substantial number of ghorfas (about 400 in total stacked no more than two stories high) for the storage of grain and other food staples. A unique grouping of ghorfas built in the center of the original courtyard was also added at a later date, dividing the space into an open northern area connected to a narrow southern row (complete with a distinctive archway near the southeastern end of the row).

The ksar complex has a relatively long history as a tourism attraction linked to intermittent business investment initiatives by various managing groups dating back to the 1960s. The first documented commercial venture to offer lodging accommodations at the site, named “Ghorfa Hotel,” was in operation prior to 1980. Attempts to attract consistent cliente proved to be unsuccessful, forcing all business operations to close in the late 1990s.

Commercial investment was revived in 2004, this time more professional and diverse in nature, offering a museum, café, restaurant, retail shop, and hotel. New ksar-inspired ghorfas (hotel rooms) coupled with extravagant decor, largely incongruent with the traditional design of the heritage site, controversially replaced the dilapidated granary architecture of the original courtyard prior to mid-2010. In addition, crews separated the two courtyards of the ksar complex by building a ghorfa-like wall (with an access door) on each side of the ghorfa cluster in the center of the original courtyard, removing the distinctive archway in the process. A third wall was erected in the southeast courtyard to isolate its most narrow section (ca. 150 meters long) along with the ksar’s original exterior entrance from the rest of the complex. These changes were amplified by the construction of an adjoining contemporary entrance area northwest of the ksar exterior filled with an oversized artificial eagle embedded in a waterfall, statues of dinosaurs and dromedary camels, and plow and amphora displays.

The Cherait Group, which acquired authorities in 2011 to conduct business operations at Ksar Ouled Debbab, serves as the current management group over the site, focusing on luxury hotel accommodations, a high-quality restaurant (with interactive events), and a regional/Islamic art museum. The entirety of the southeast courtyard remains unrenovated and presently functions as a dumping ground for assorted paraphernalia.

In his monumental work The Making of Star Wars: The Definitive Story Behind the Original Film (2007), J.W. Rinzler published negatives (Kodak Tri-X panchromatic film) of various location scout photos taken by John Barry (production designer) during the principal Episode IV pre-production recce to Tunisia in mid-November 1975. No names or clear identifications were provided for any of the negatives. Multi-faceted research confirms that five recce photos combine to depict the northeast wall and north corner of the Ksar Ouled Debbab original courtyard. Comparisons with historical photos taken prior to the major structural renovations of the original courtyard proved to be critical in the process of verifying this location. The post-renovation architecture renders the Ksar Ouled Debbab recce photos otherwise unrecognizable.

An original concept sketch drawn by Barry during or shortly after the mid-November 1975 location scout provides additional evidence to identify Ksar Ouled Debbab as a recce site. The sketch depicts ghorfas on both sides of the divided original courtyard from a vantage point approximately 40 meters southeast of the perimeter of the courtyard. The distinctive archway of the courtyard and outline of the mountain range west of the Ksar Ouled Debbab village are also visible. Five groups of Jawas and a moisture vaporator cluster represent the fictional elements in the sketch.

The sketch caption labels the illustrated location as: “Adjim Djerba. Foume Tatahouine. Ghorfa Hotel.” “Ghorfa Hotel” is a reference to the business previously in operation at Ksar Ouled Debbab, proving that the hotel was functional as early as 1975. “Foume Tatahouine” (Arabic: “mouth of the water springs”) is the antiquated name formerly used for nearby Tataouine city, which, as the only major city in the vicinity of Ksar Ouled Debbab, likely served as the base location to explore the Tataouine Governorate during the mid-November 1975 location scout. The reference to “Adjim Djerba” links the Mos Eisley Cantina set location in Ajim to this recce site, which, according to a pre-production Tunisia shooting schedule (made prior to late January 1976), was slated to function as the Mos Eisley slum dwellings exterior for a scene—first introduced in the second draft (28 January 1975)—in which Luke stops his landspeeder to ask a group of Jawas directions to the cantina.

The Mos Eisley slums street scene was replaced in the fourth draft (1 January 1976) with scene 48 [Ben: “These are not the droids you’re looking for”]. Gary Kurtz (producer) confirmed in a department heads meeting on 23 January 1976 that this script change was final, eliminating the scene of the “landspeeder approaching the town with the Jawas gathered around a solar heater” intended to be shot at “Foum Tataouine.” 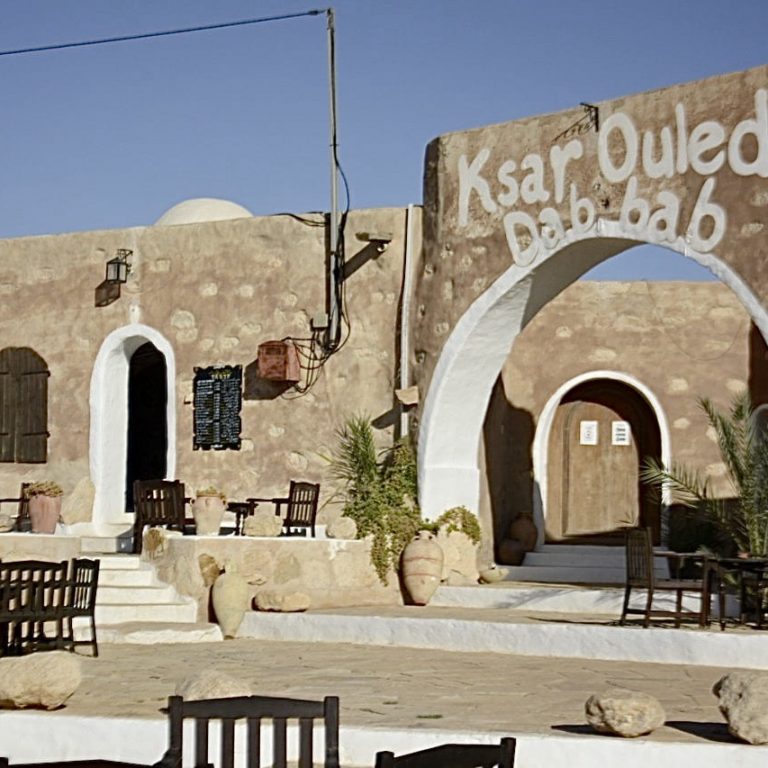 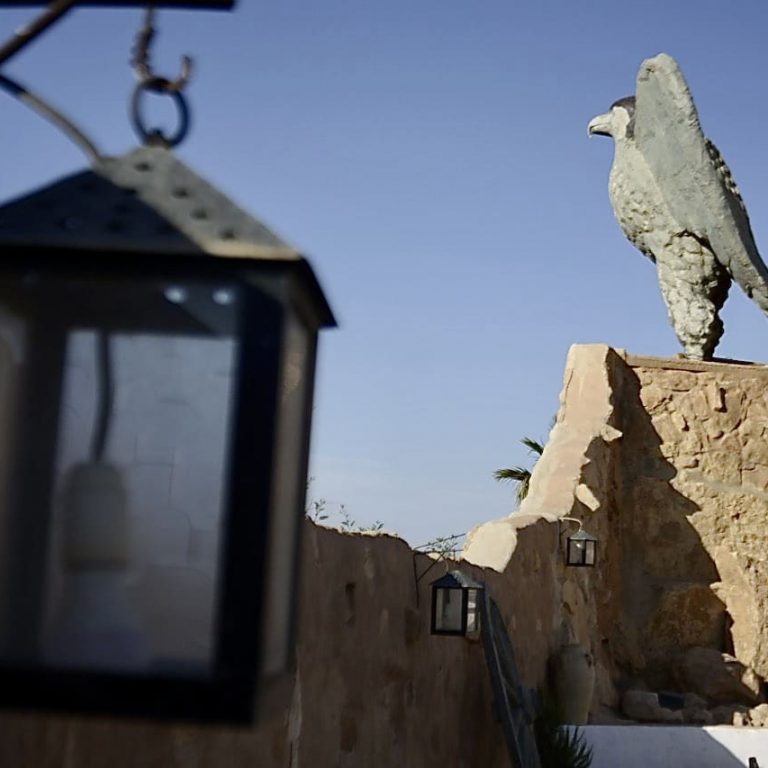 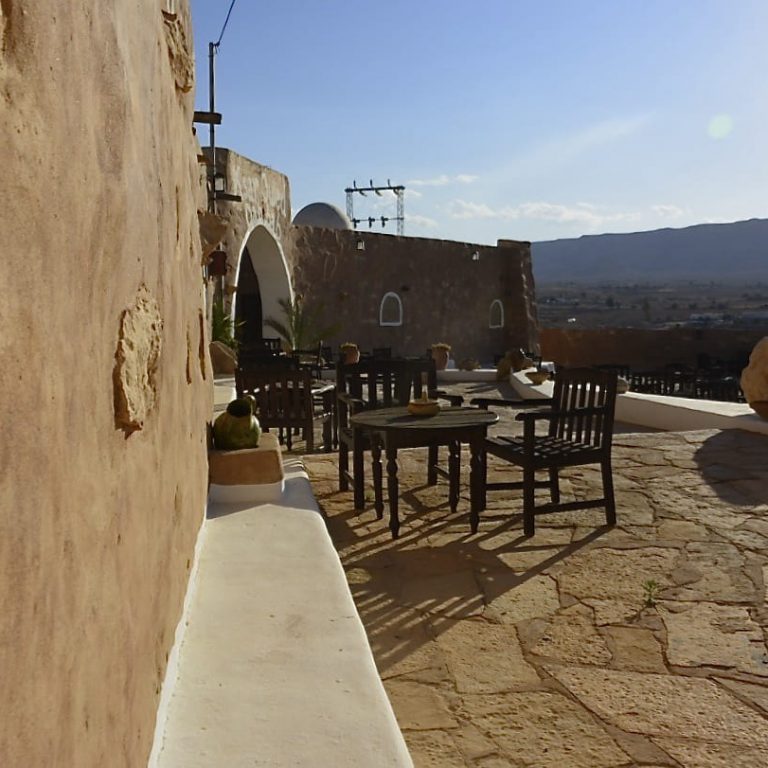 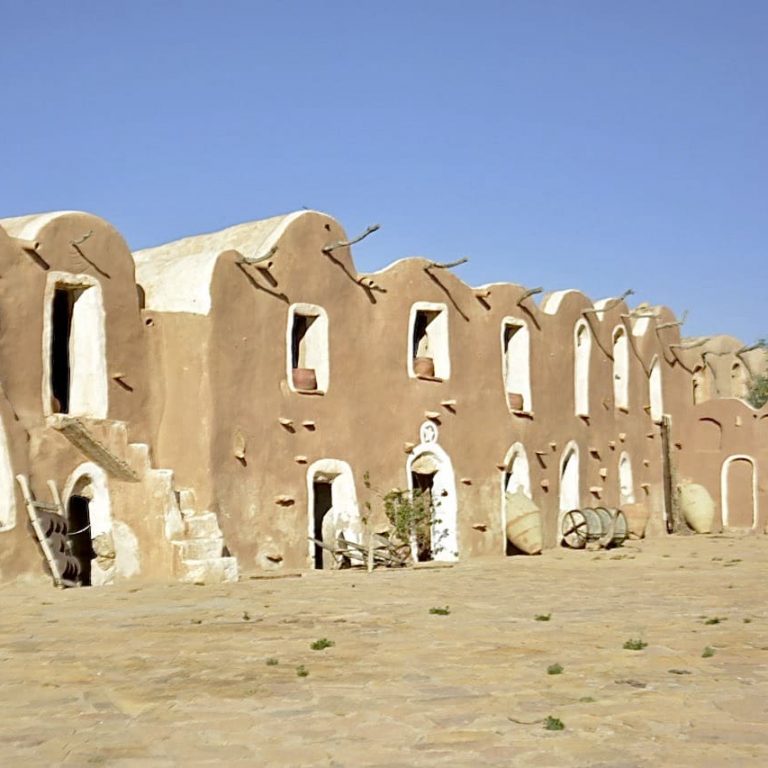 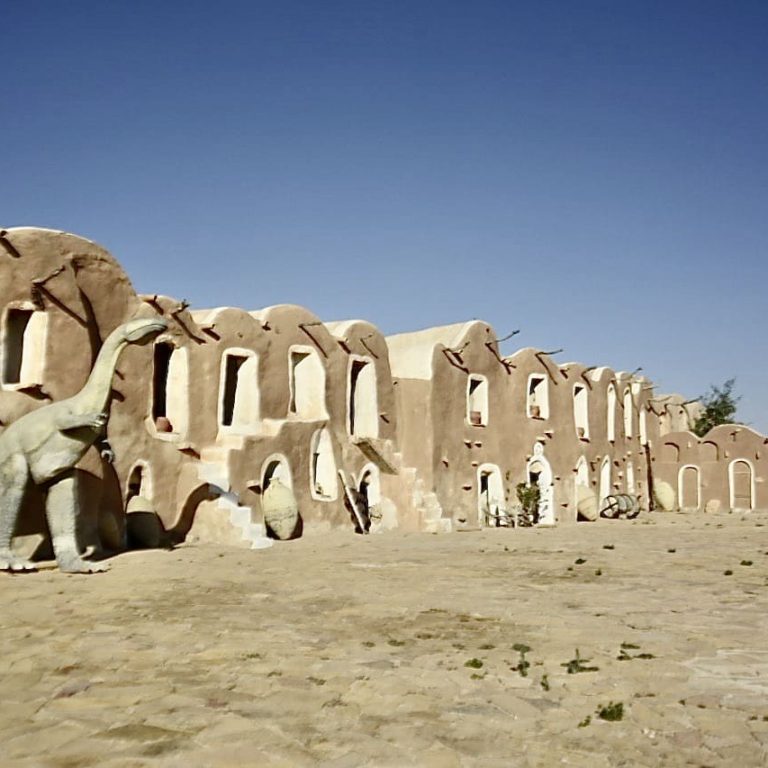 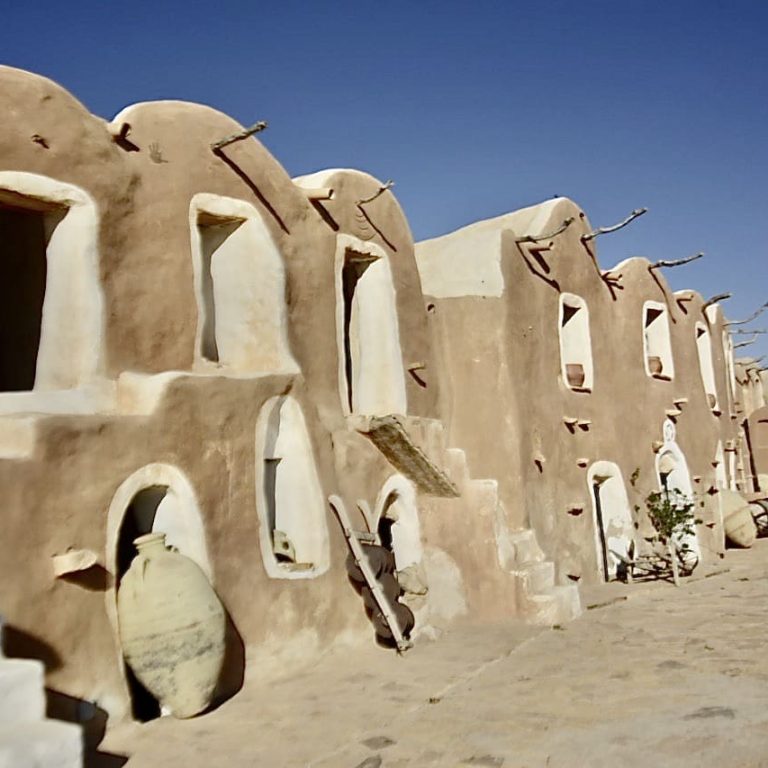 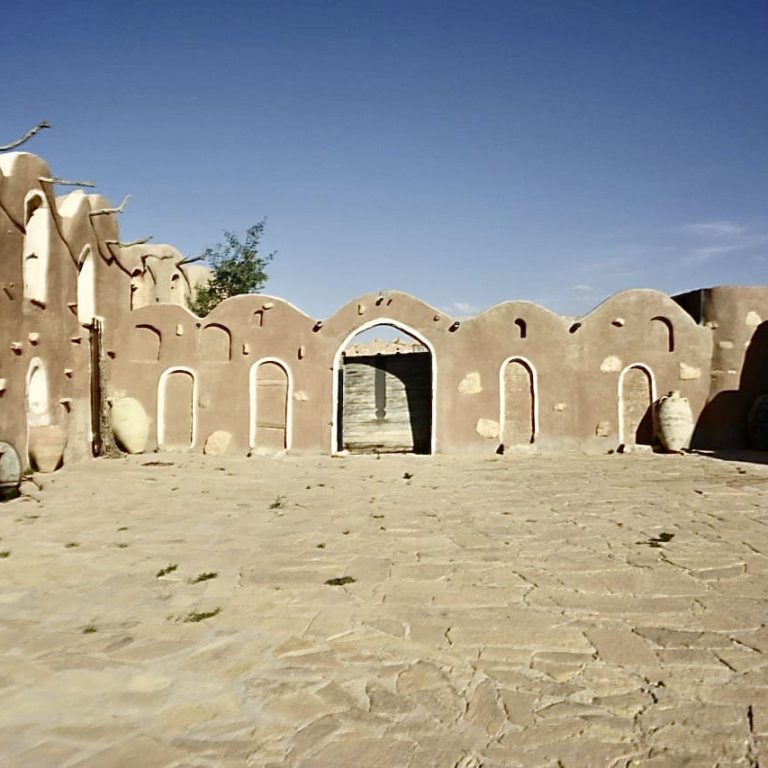 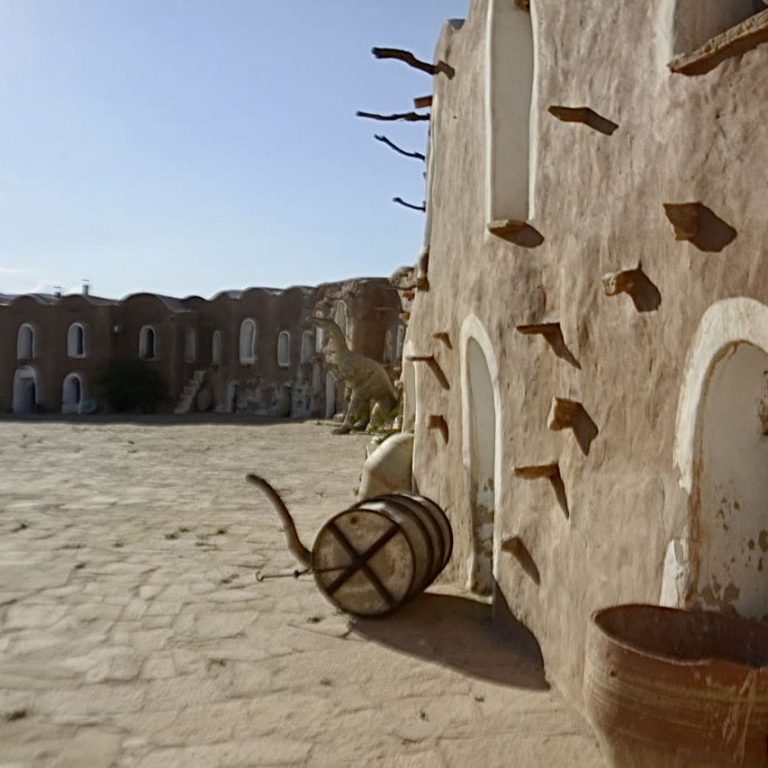 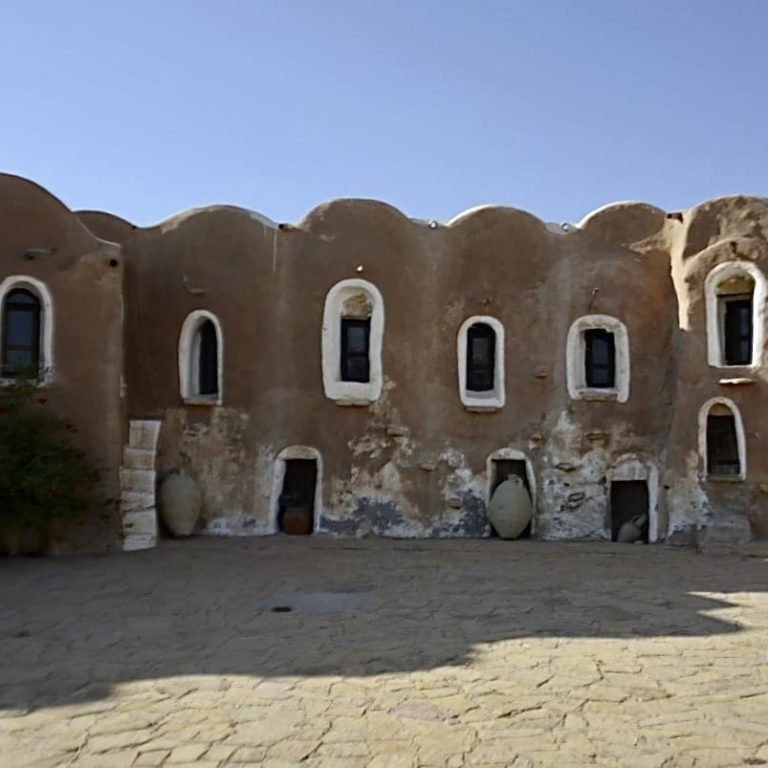 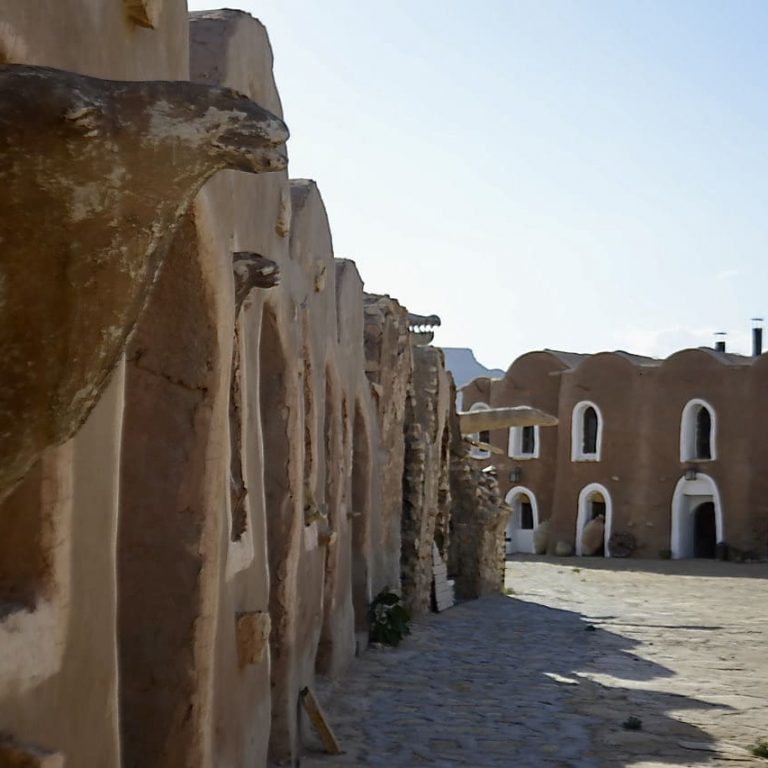 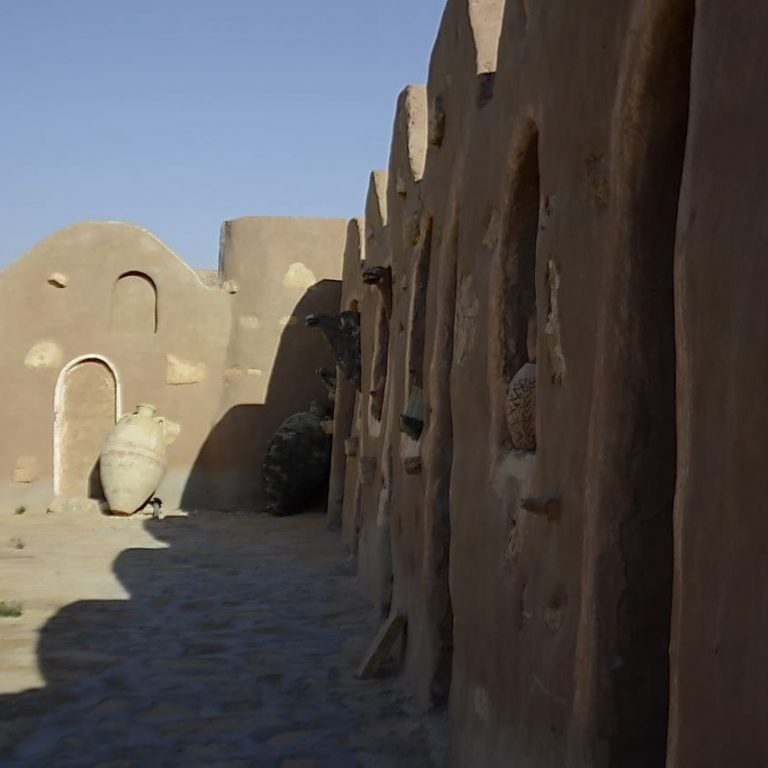 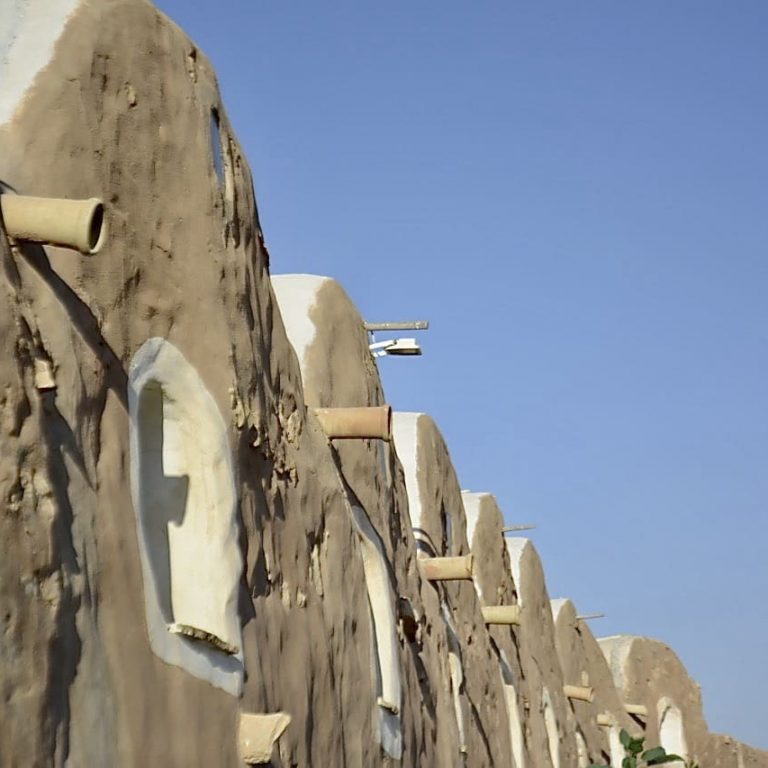 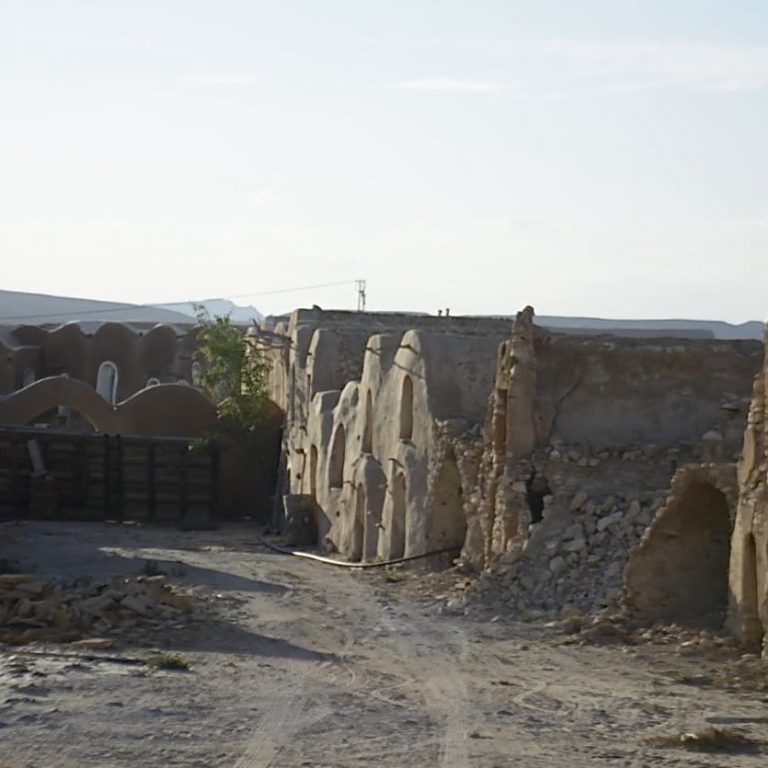 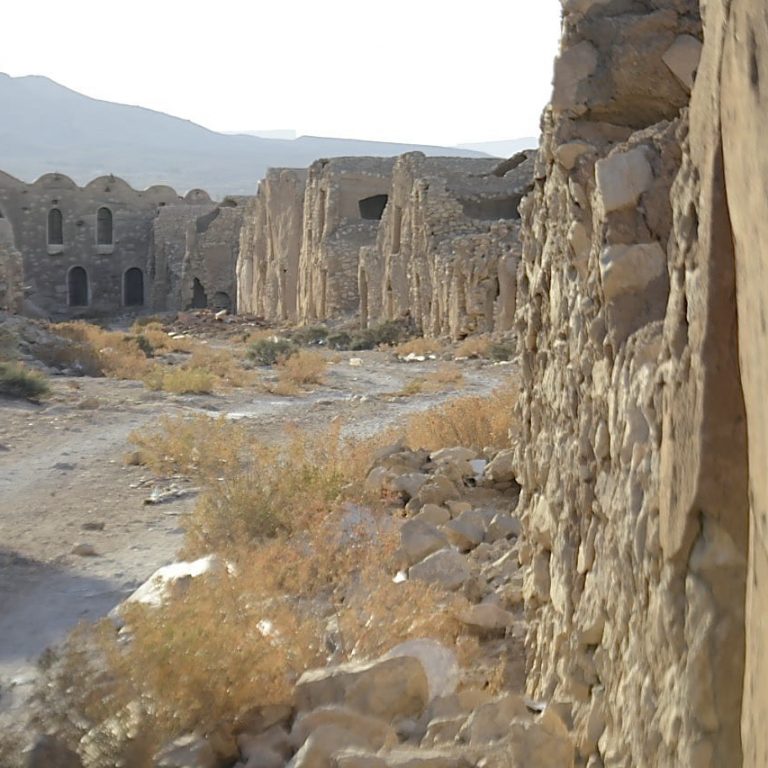 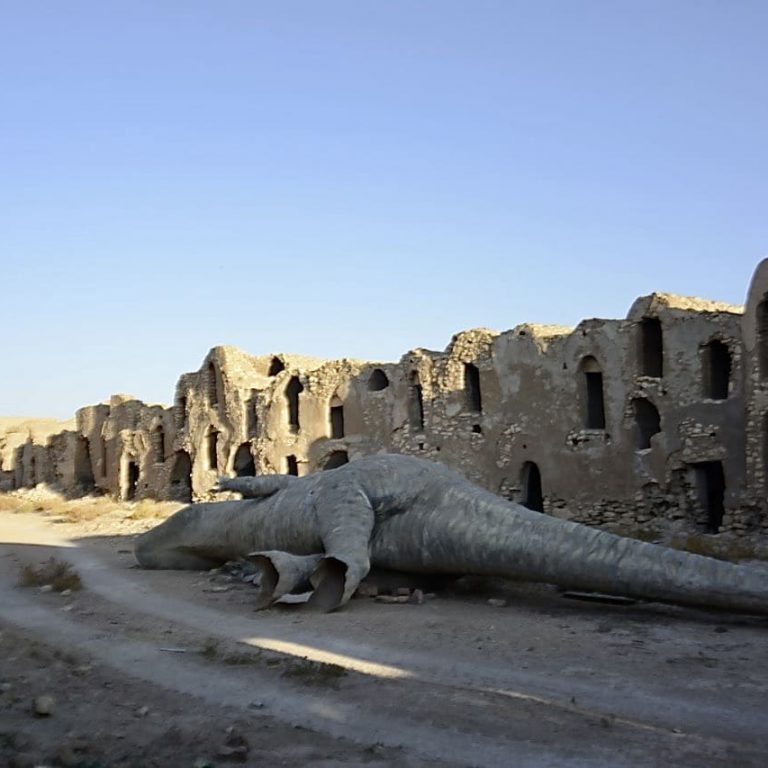 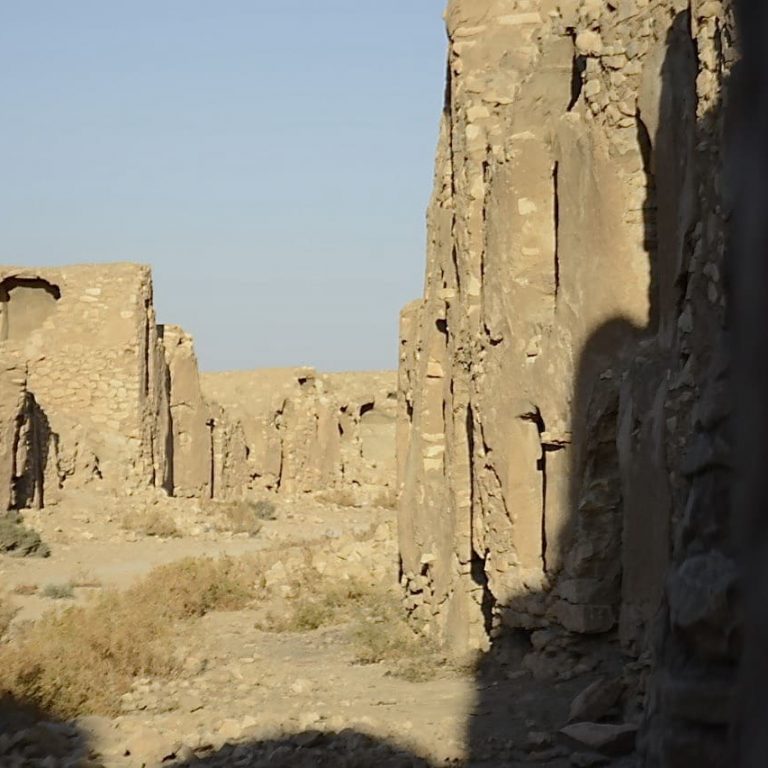 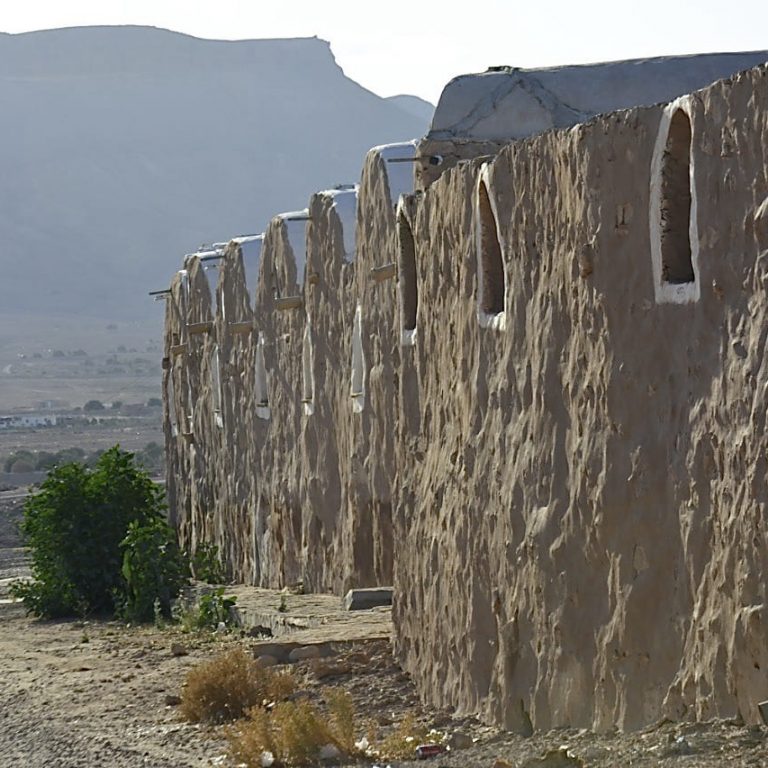 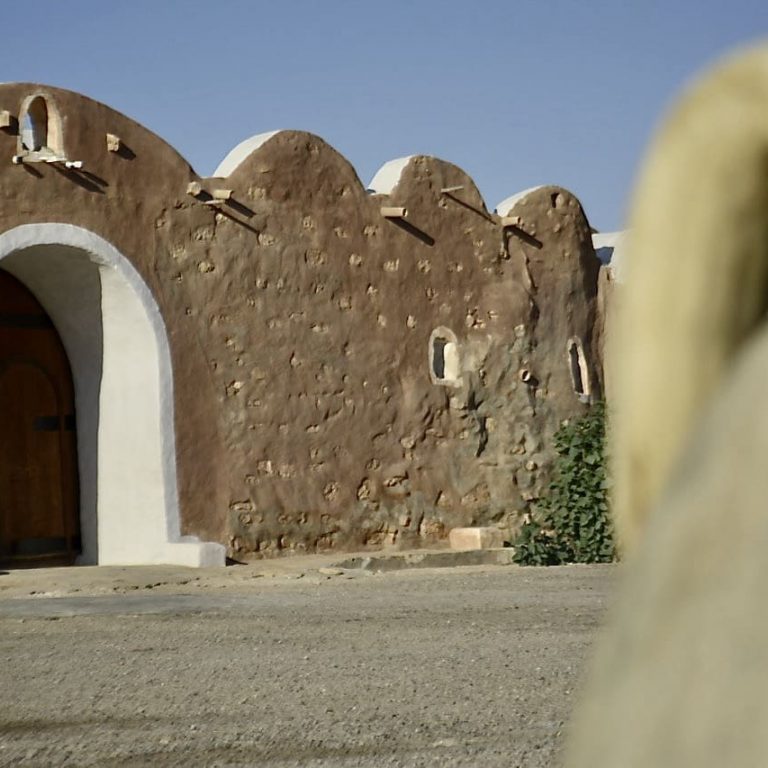 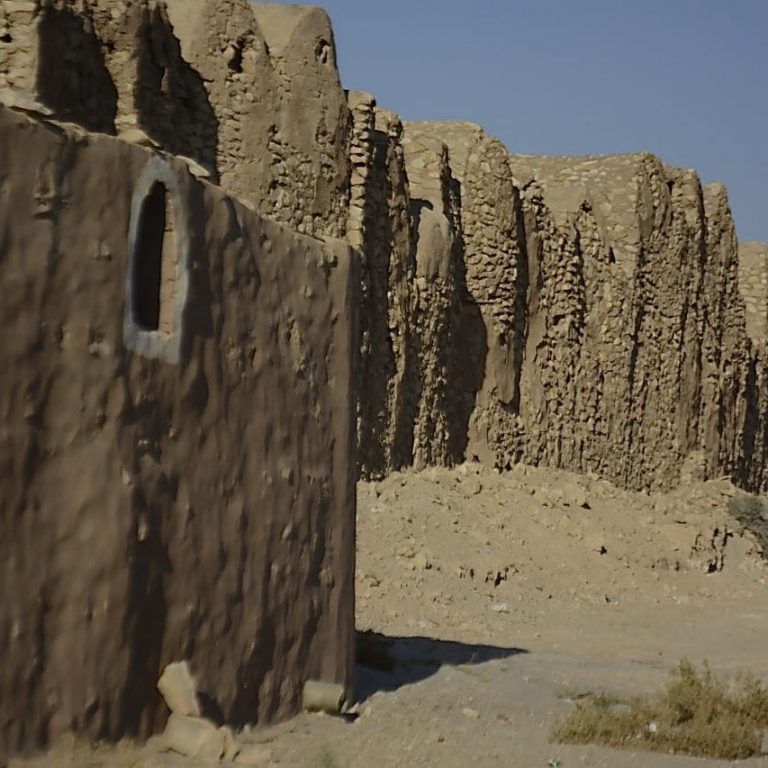