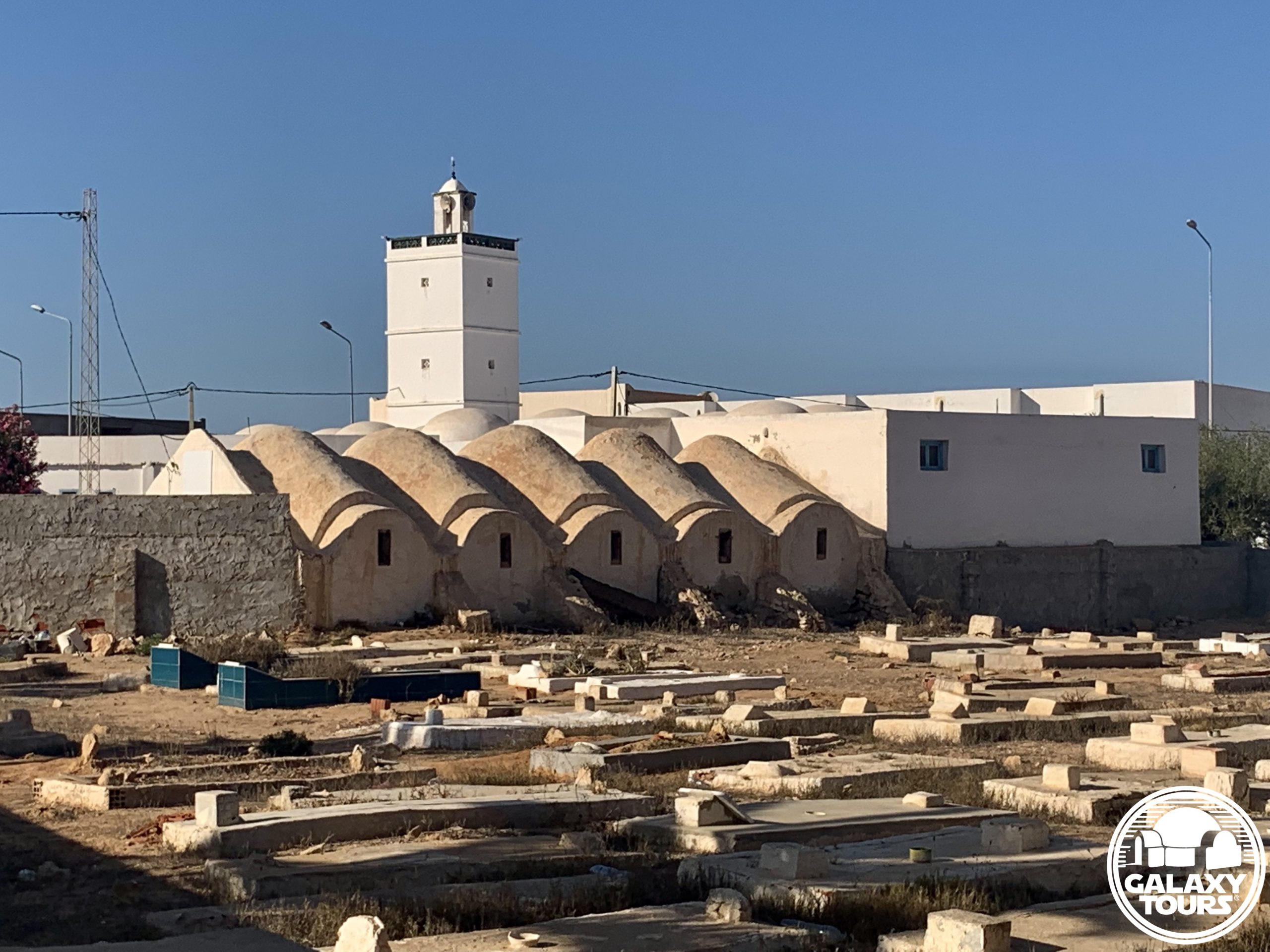 Sedouikech (alternately: Seduiksh, Sadouikch, Sedouikch, Sedouikeche), located on a small plateau in the southeast sector of Djerba, is a town spanning approximately 13 km² in total area. Stemming from the medieval-era network of densely packed rural Djerban settlements, Sedouikech is defined by its menzel complexes, fish market, and wool weaving workshops. The town “center” is more or less divided in half by the C117 access road that connects Houmt Souk (roughly 16 km to the northwest) southward to the Roman-era viaduct, the only land route between Djerba and the Tunisian mainland. In conjunction with Ouirsighen, Guellala, and Ajim to the west, Sedouikech is distinguished as one of the few remaining locations on the island in which the Amazigh (Berber) language is spoken on a daily basis.

The Bouregba Mosque complex serves as the defining landmark in the Sedouikech center area. Resting on the highest point on the island, Ibadi authorities constructed the mosque and adjoining minaret in the late 19th century CE to serve both as a place of worship and a defensive vantage point for inland Djerba. The wool weaving workshop and cemetery were added to the Ibadi complex likely in the early 20th century CE.

Establishing weaving workshops next to mosques was a common practice for historic Djerba. The unique Djerban weaving workshop design typically consists of (1) matching front and rear pentagon-shaped facades with parallel vertical walls, (2) one entrance access (front facade), (3) a vaulted concave roof often lined with five ghorfa-like vaults on each side, and (4) five external buttresses paired with window openings on each side wall.

John Barry (production designer) used Kodak Tri-X panchromatic photographs and hand-drawn sketches to document the various locations scouted during the principal Episode IV pre-production recce to Tunisia in mid-November 1975. Over 30 negatives from Barry’s collection of recce photos have been released via official publications or Star Wars community online platforms. No names or specific identifications are associated with any of the negatives.

Multi-faceted research confirms that one of Barry’s recce photos depicts the Bouregba Mosque from the vantage point of the C117 access road overlooking the southwest corner of the complex. Barry appears to have taken the photo from inside a vehicle, suggesting only a pass-by stop at the complex. The focal point of the photo seems to be the weaving workshop situated between the mosque minaret and cemetery, mirroring the interest given to the Hanout el-Aouina workshop in Houmt Souk during the same recce.

As the easternmost Star Wars recce site on Djerba island, Bouregba Mosque represents the scouted location nearest to the lodging accommodations used by the Episode IV recce team in likely the Midoun Zone Touristique. Despite various structural changes/additions that have taken place at the complex since the 1975 recce, the Bouregba Mosque minaret, weaving workshop, and cemetery remain overtly recognizable, particularly when viewed over the southwest section of the post-1975 perimeter stone wall that surrounds the complex. 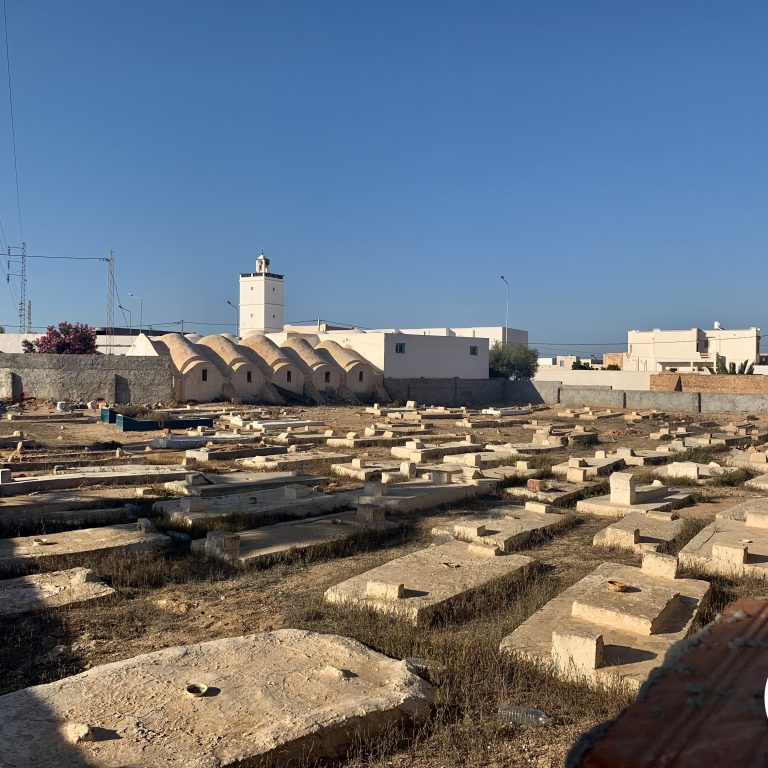 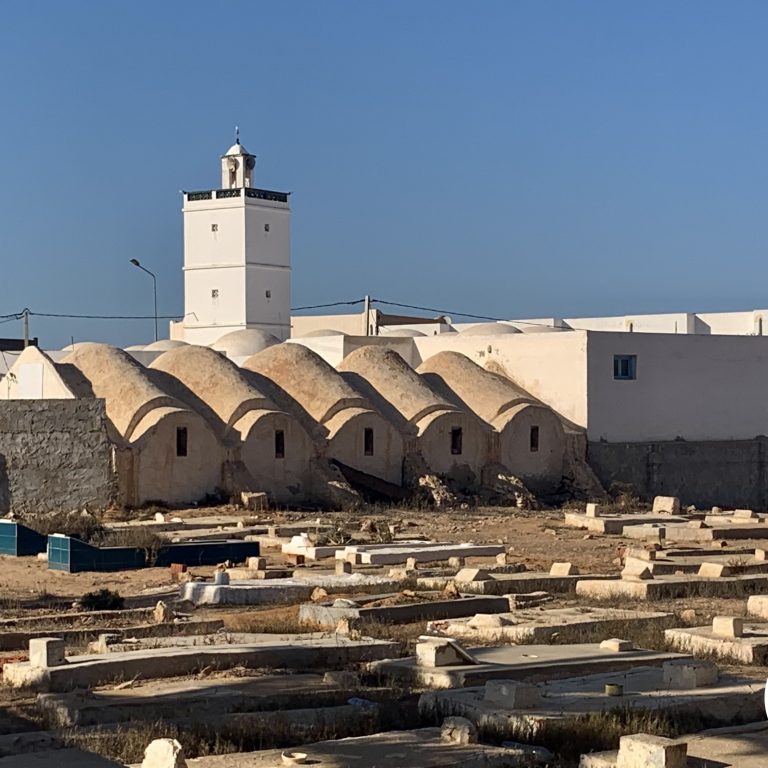 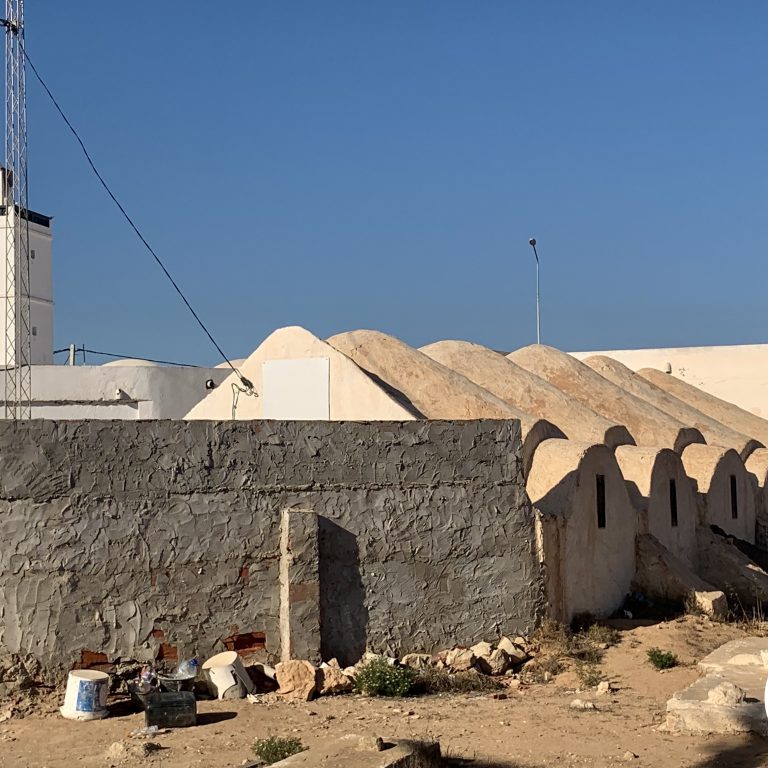 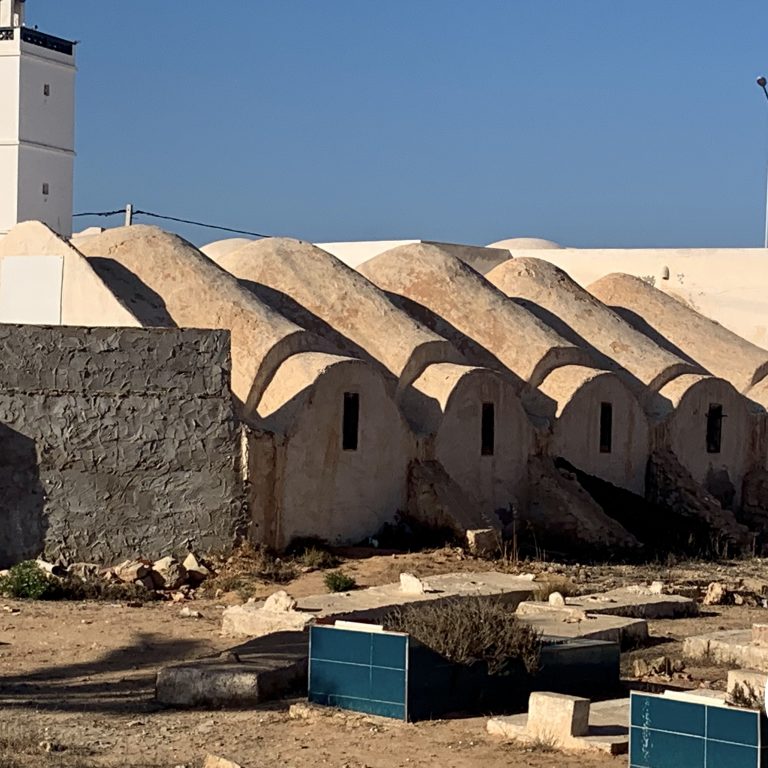 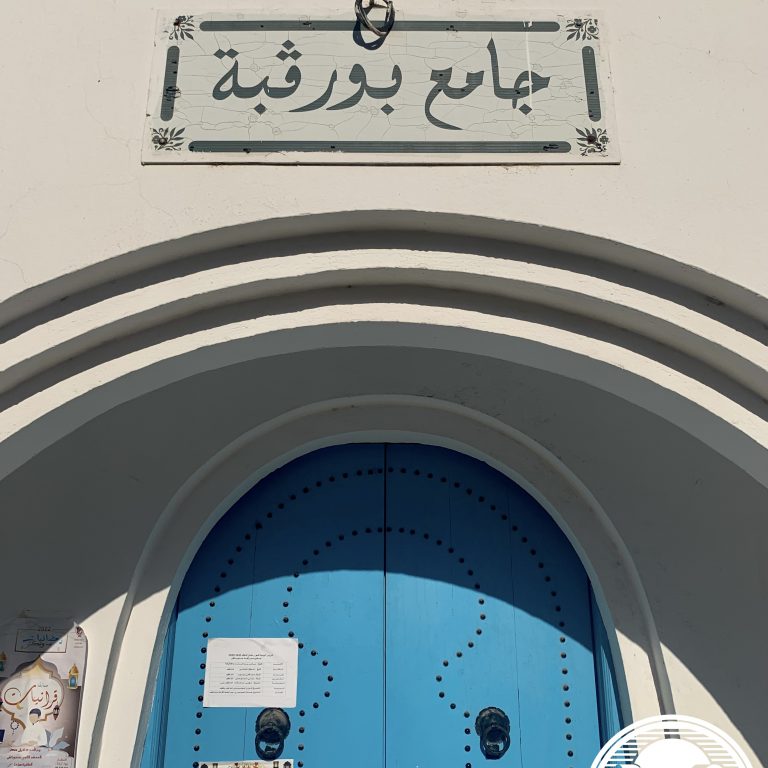 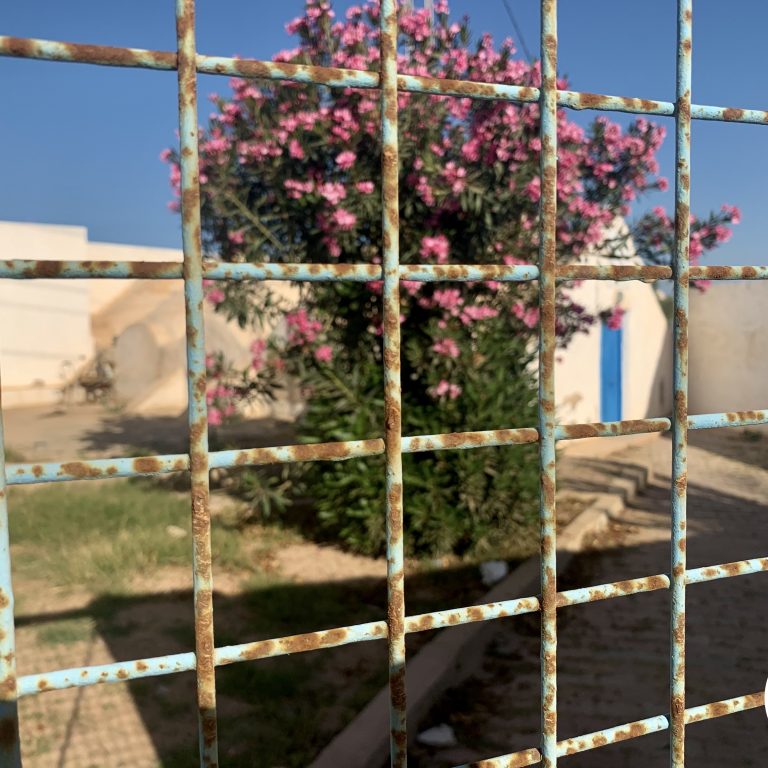 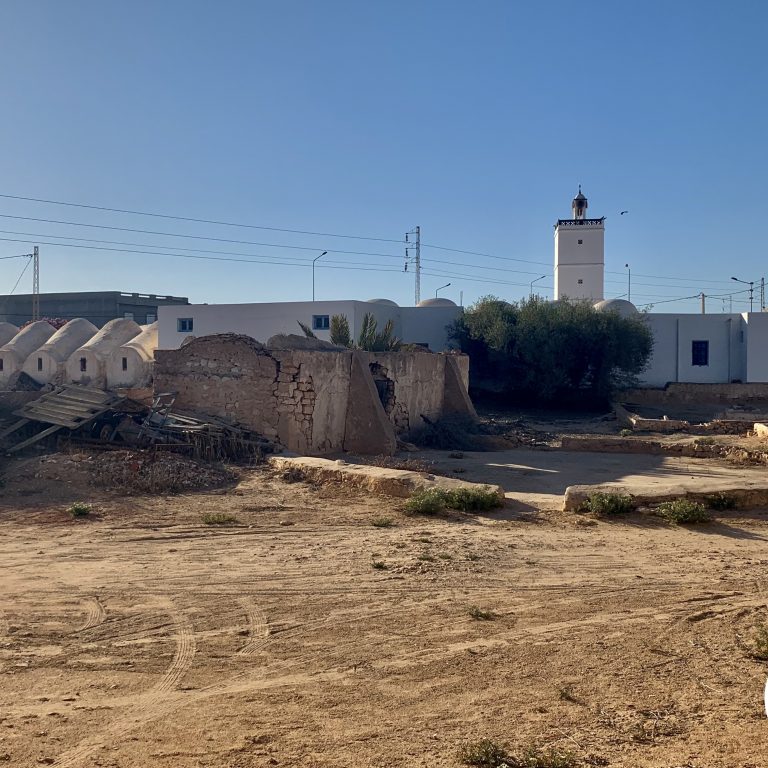 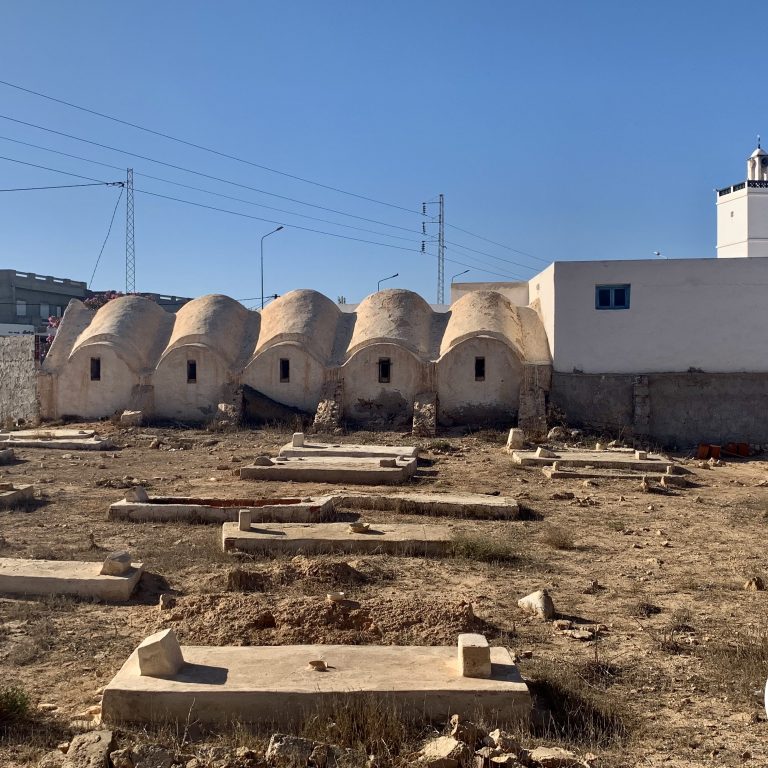 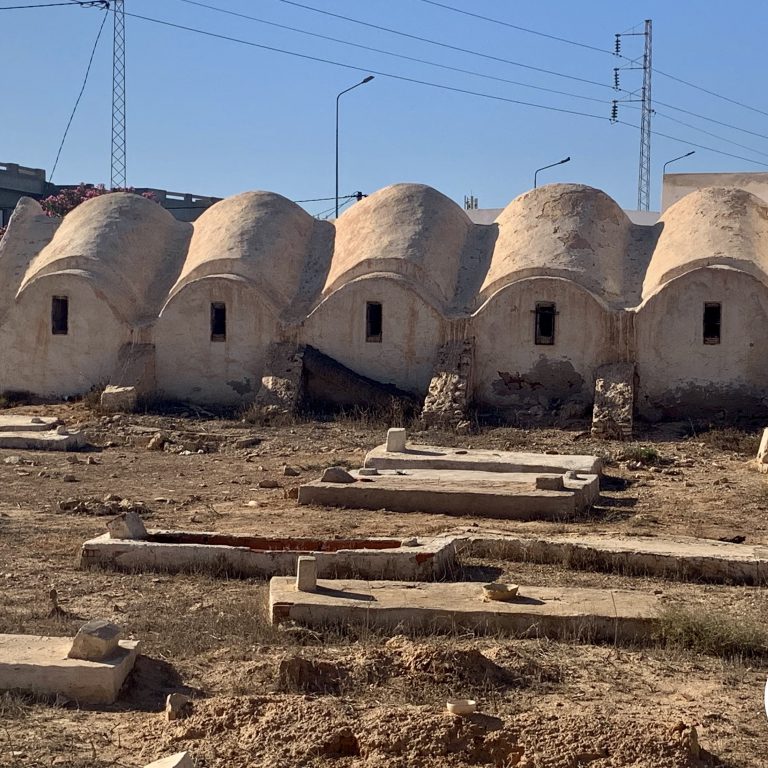