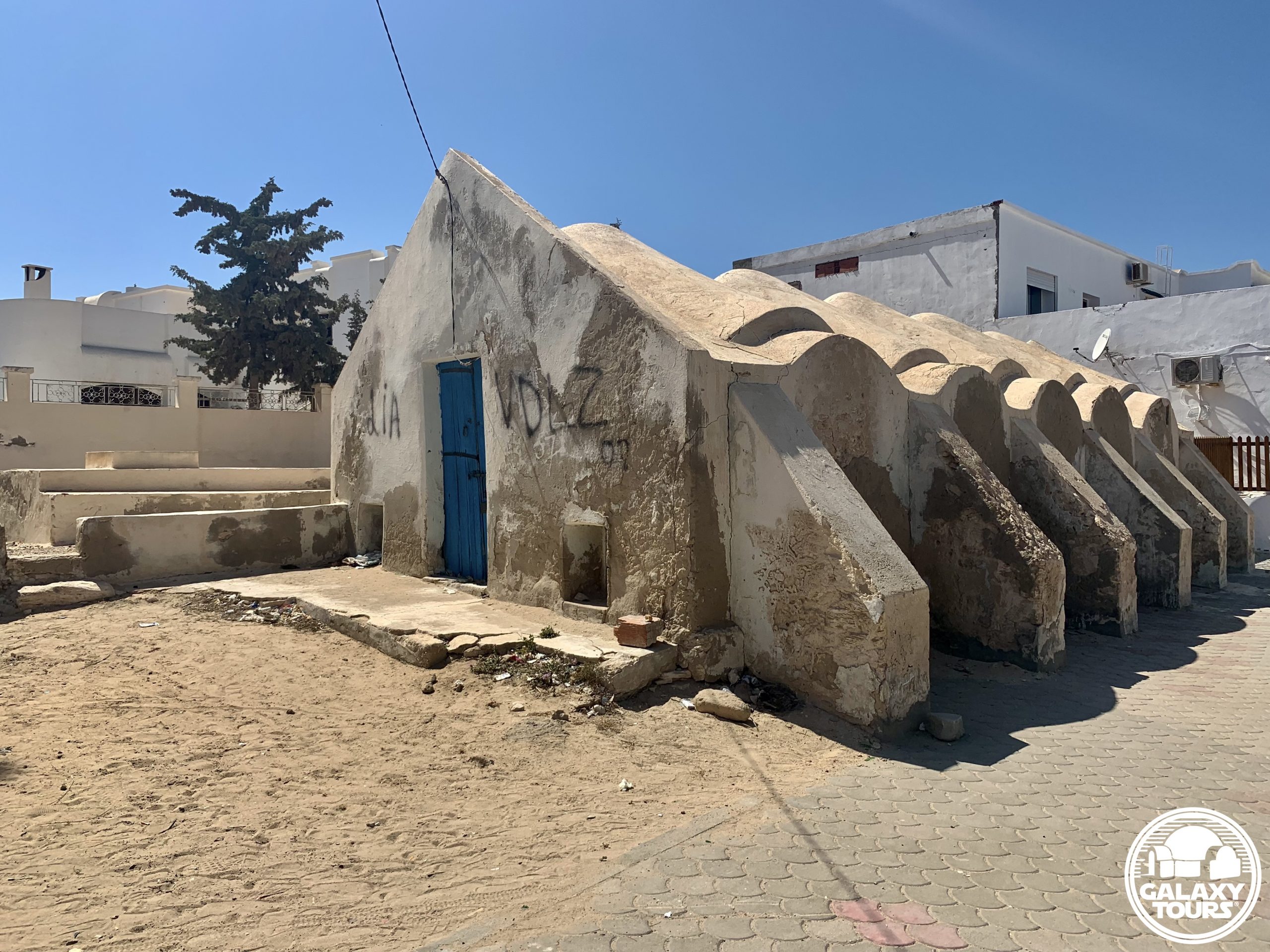 Houmt Souk (Arabic: “market neighborhood”), the Djerban capital, is located in the northwest sector of the island approximately 7.5 km east of Djerba-Zarzis Airport. Historically tethered to a Roman settlement called Gerba (alternately: Griba), Houmt Souk was founded as the island’s commercial market and remains Djerba’s lively commercial hub. At the city center is the souk with two qaysarriya (roofed bazaars) reserved for the most expensive goods and several key historical landmarks, to include Sidi Brahim Jomni Mosque, Al-Ghorba Mosque, the Mosque of the Turks, and the Mausoleum of Sidi Abdelkader, which couples as the office for the Association pour la Sauvegarde de l’Ile de Djerba (ASSIDJE). The city is divided into four districts: Taourit and Essouani in the north; Boumellel and Ejjouamaâ in the south.

Borj El Kebir (alternately: Borj El Ghazi Mustapha), the coastal Houmt Souk fort constructed in 1289 by Roger de Lauria (Aragonese king of Sicily), is linked to Ottoman naval dominance at the Battle of Djerba. In a matter of hours on 11 May 1560, the Ottoman admiral Piyale Pasha handed a crushing defeat to a Spanish Armada coalition positioned along the northern Djerban coastline. A significant grouping of Spaniards (accounts range from 500 to 5,000 sailors) retreated to Borj El Kebir and were reportedly massacred inside the fort. The Ottomans reportedly erected a pyramid of Spanish skulls at the fort to commemorate the victory. The skulls stood in place until the governing Turkish Bey, seeking to appease European diplomats, buried the mound in 1848.

The Hanout el-Aouina workshop with a small west-side adjoining courtyard is located less than 1 km northwest of the city center souk along the busy Avenue Habib Bourguiba (part of the C117 access road) in northern Houmt Souk. Built in the 18th century CE by the Seoud family, the name Hanout el-Aouina in Tunisian Arabic means “the plum workshop,” suggesting the presence of a prominent plum tree in the immediate vicinity at the time of construction. The Seoud family owned and operated the wool weaving workshop up until at least the late 20th century CE. The historical value of the now-abandoned workshop is easy to overlook amidst the surrounding modern apartments, shops, restaurants, and administrative buildings.

Expertise in wool weaving as a defining Djerban handicraft dates back to the Middle Ages. Traditional wool weaving workshops—whether stand-alone or connected to menzel and/or mosque complexes—are numerous on the island. The unique Djerban weaving workshop design typically consists of (1) matching front and rear pentagon-shaped facades with parallel vertical walls, (2) one entrance access (front facade), (3) a vaulted concave roof often lined with five ghorfa-like vaults on each side, and (4) five external buttresses paired with window openings on each side wall. The architectural composition of Hanout el-Aouina incorporates all elements of this typical Djerban design.

John Barry (production designer) used Kodak Tri-X panchromatic photographs and hand-drawn sketches to document the various locations scouted during the principal Episode IV pre-production recce to Tunisia in mid-November 1975. Over 30 negatives from Barry’s collection of recce photos have been released via official publications or Star Wars community online platforms. No names or specific identifications are associated with any of the negatives.

Multi-faceted research confirms that one of Barry’s recce photos depicts the Hanout el-Aouina workshop from a vantage point close to Avenue Habib Bourguiba approximately 10 meters southeast of the building entrance. Visible in the recce photo is the workshop front facade, eastern side wall, west-side courtyard, and an assortment of wool materials placed outside in the entrance area, likely as part of the production process. (The outdoor activity exhibited in the photo confirms that the workshop was operational up through 1975). The deliberate stop at Hanout el-Aouina mirrors the interest given to the Bouregba Mosque complex weaving workshop in Sedouikech during the same recce.

Hanout el-Aouina, the first Star Wars recce site identified in Houmt Souk, remains readily recognizable, more or less unchanged since 1975 with the minor exception of a raised cement platform along the front facade. Replicating the exact angle of the recce photo is obstructed by the post-1975 placement of a large utility panel in the direct area outside the workshop used by Barry to frame the photo. Although unconfirmed, several yet-to-be-identified recce photos from Barry’s collection might possibly conclude that the Episode IV recce team also scouted various market streets inside the Houmt Souk city center. 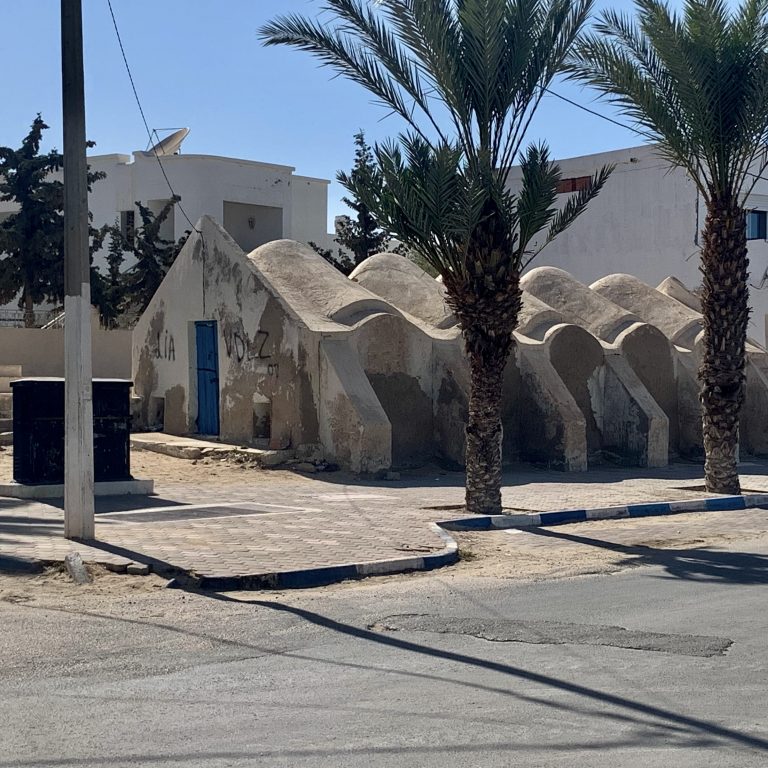 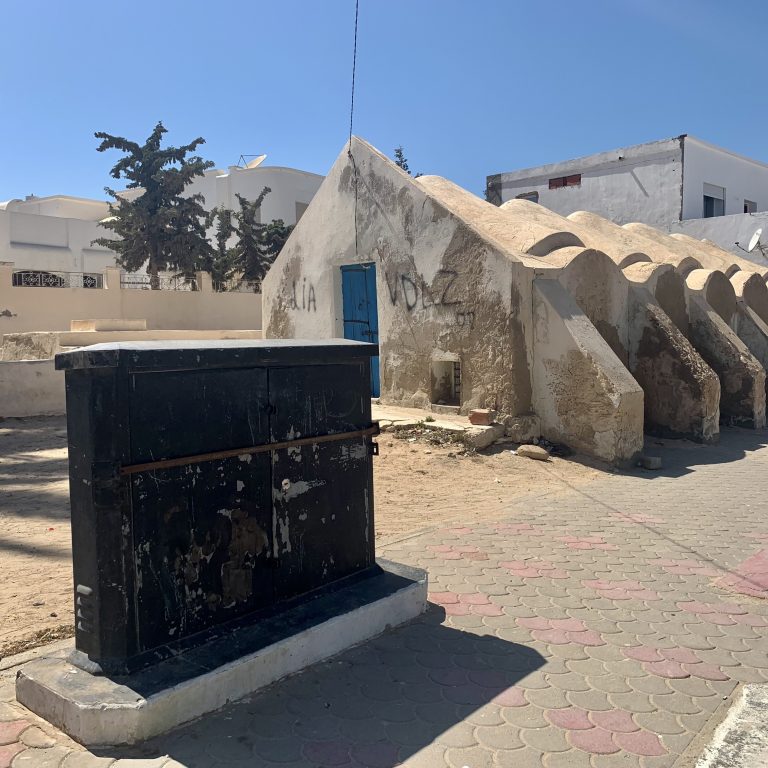 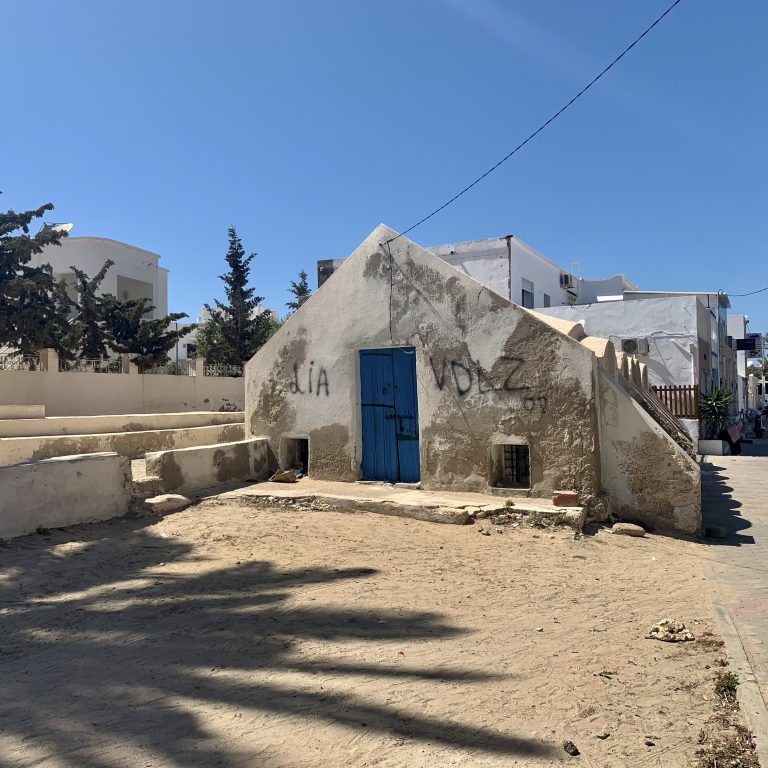 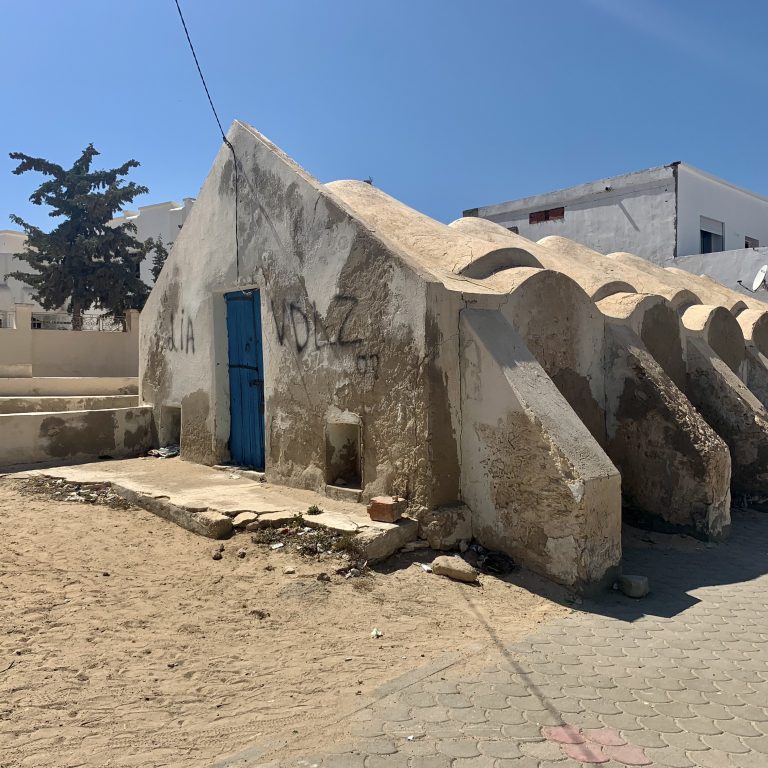 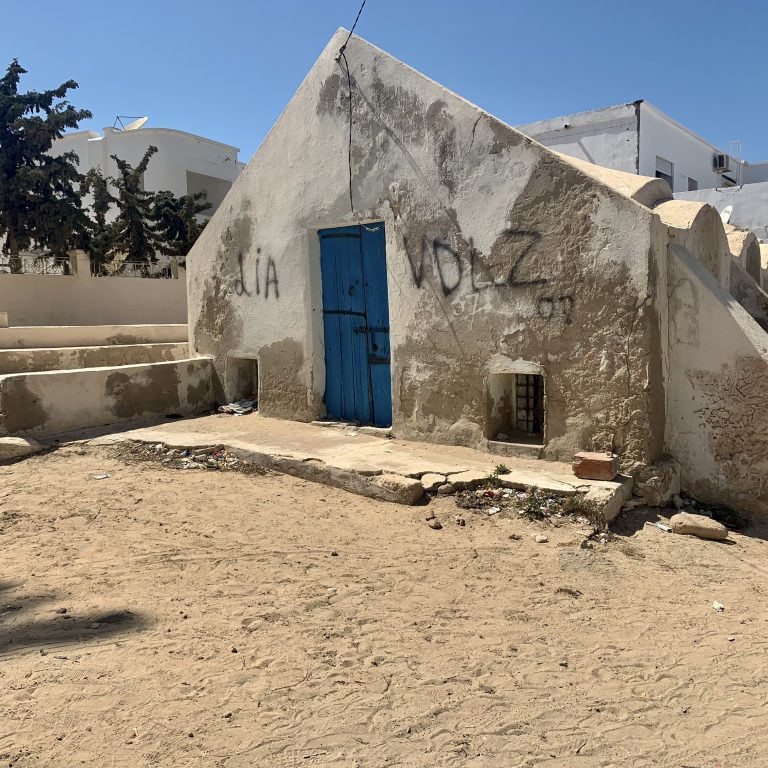 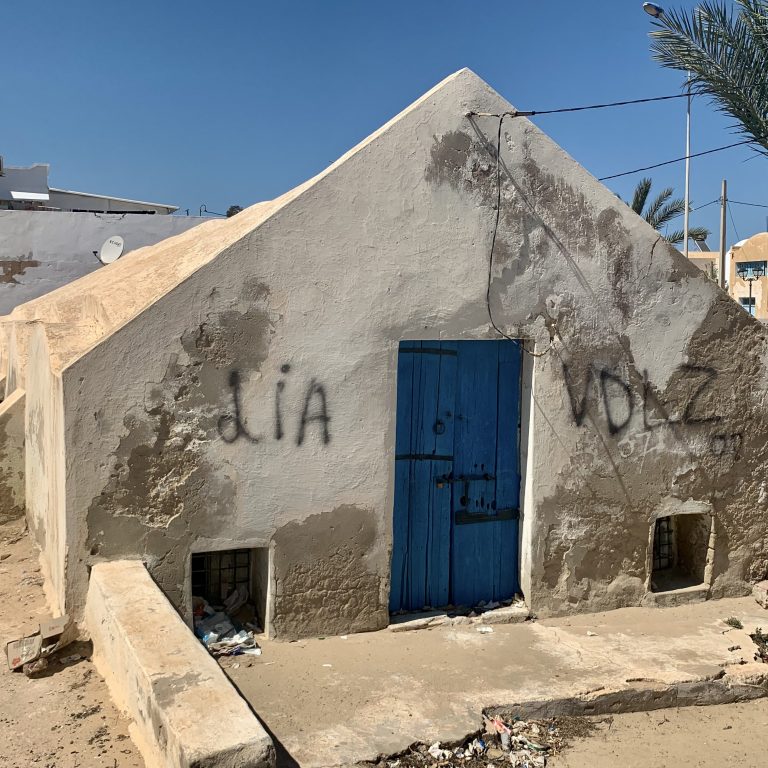 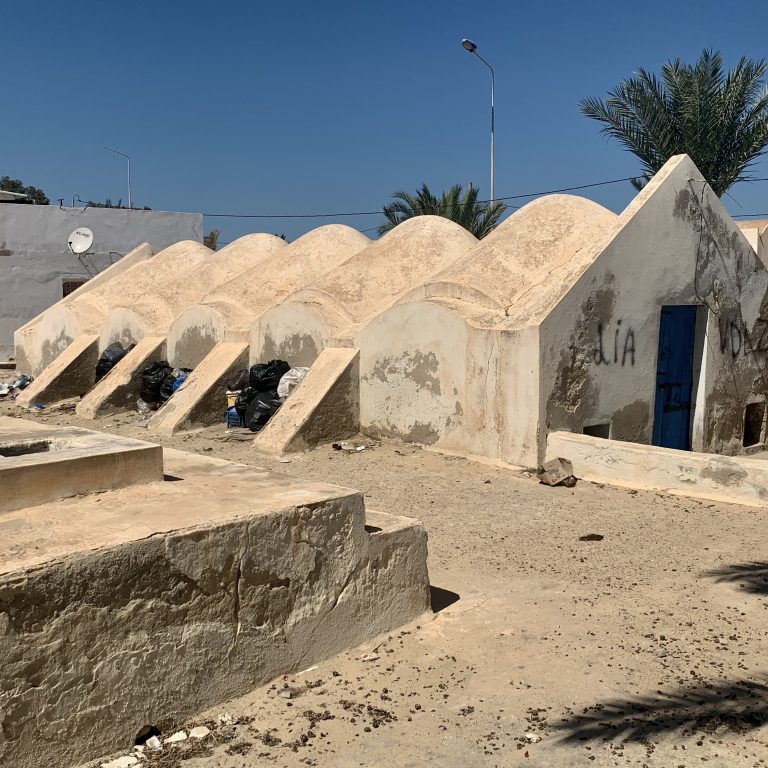 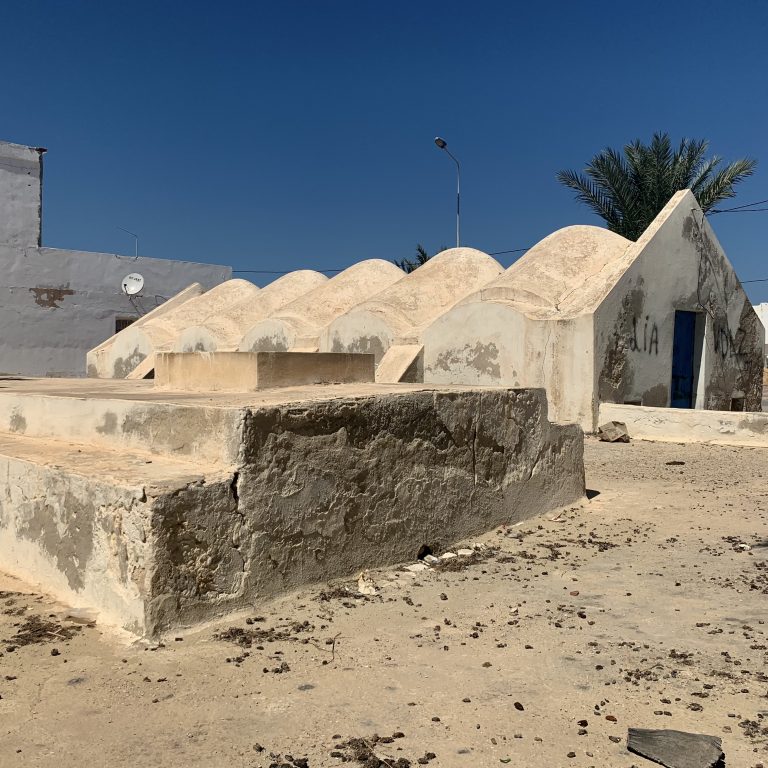 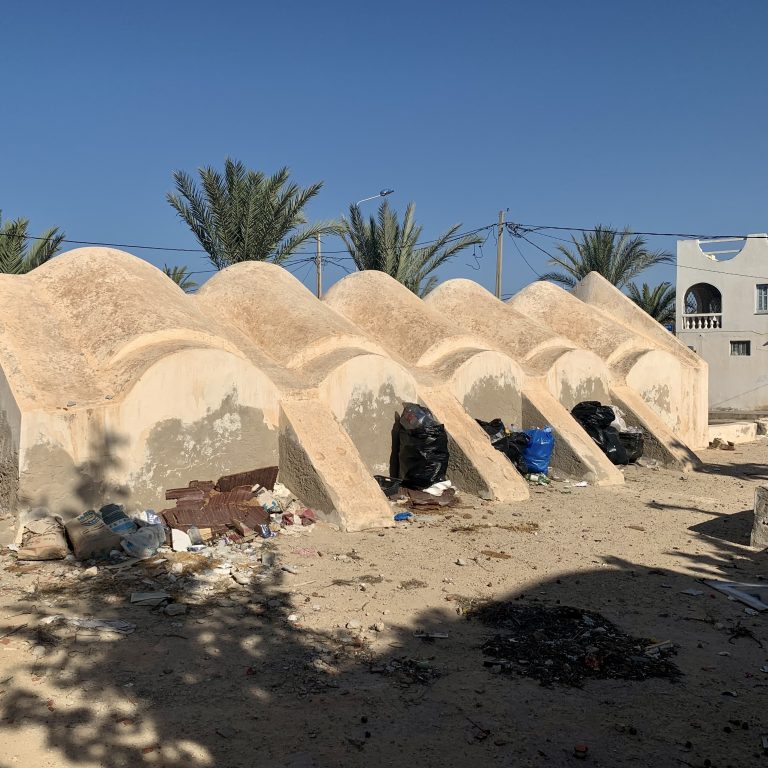 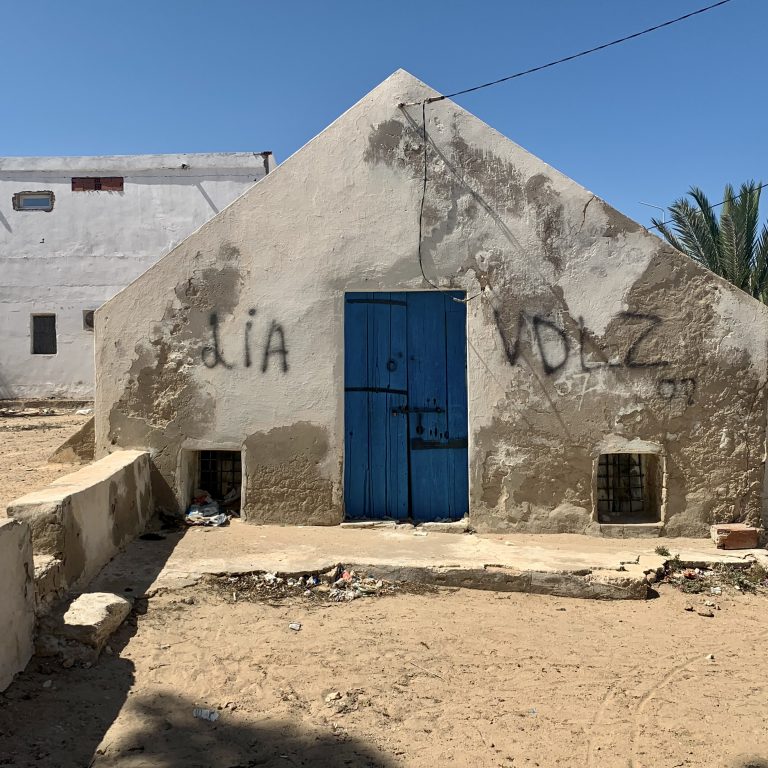 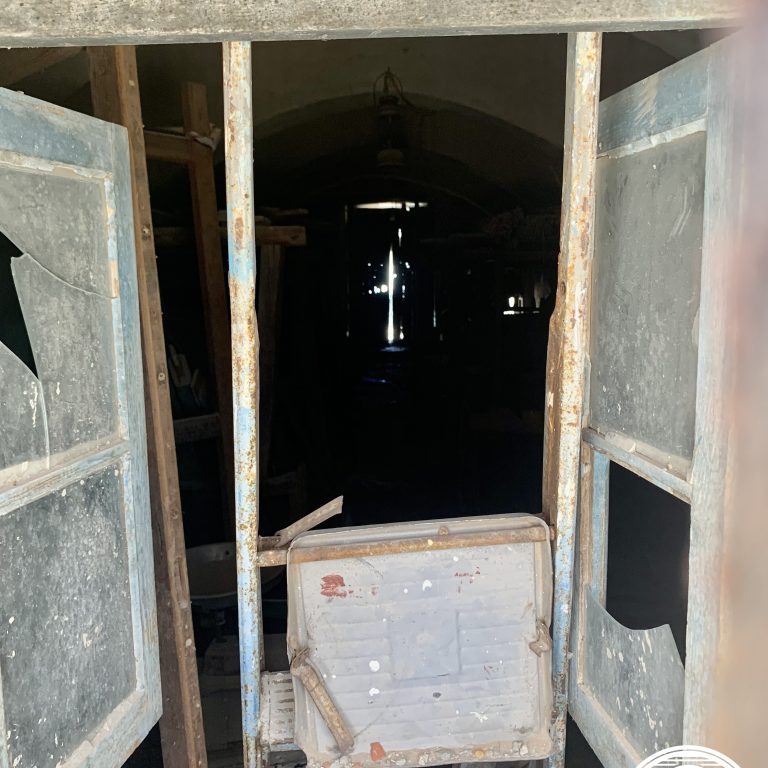 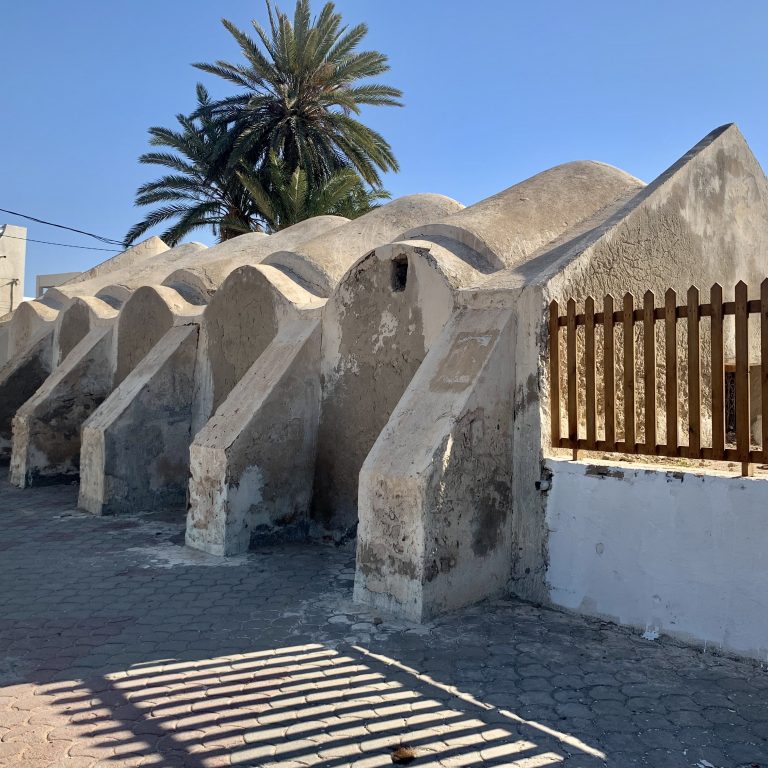 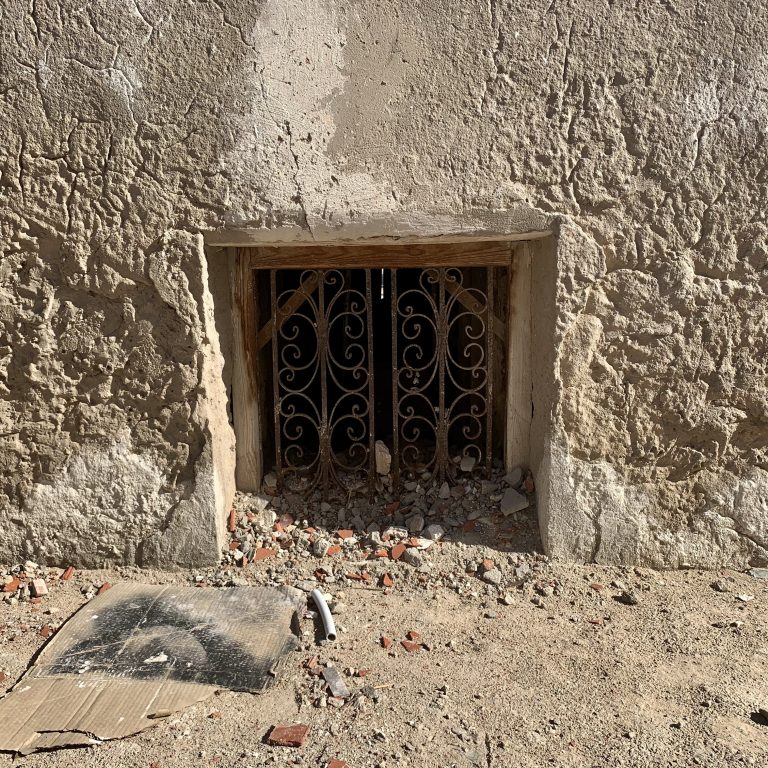