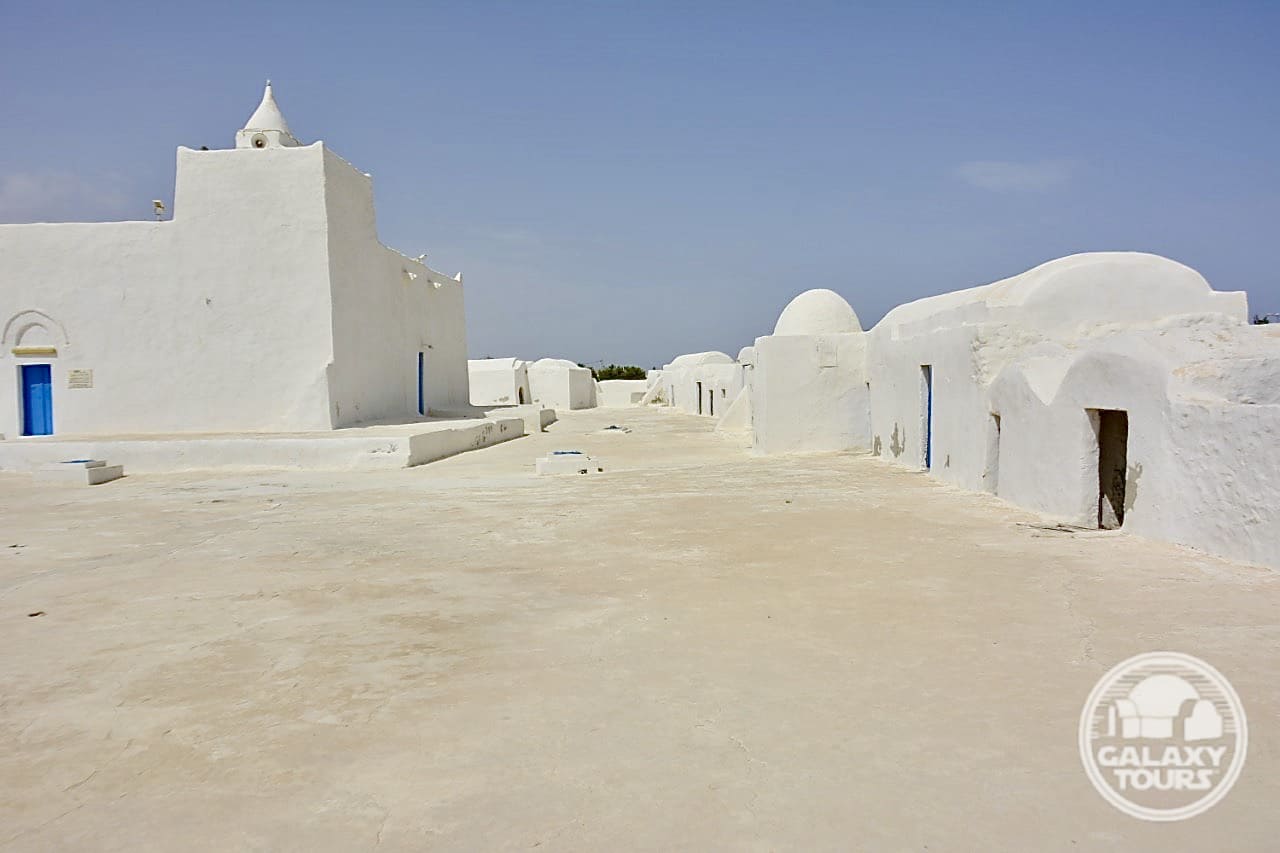 Hachan (alternately: Hachene, Hashan), located in the northwest sector of Djerba island, is a small village spanning roughly 6.25 km² in total area. Part of the medieval-era network of densely packed rural Djerban settlements, the village is populated predominantly with historic menzel complexes, some of the oldest on the island. The “center” of the village is situated some 3 km southwest of Houmt Souk. The main access road (C116) that connects Houmt Souk to Ajim divides Hachan more or less in half.

Located along the Hachan northwest perimeter less than 100 meters south of Rue Boumessouer/Airport Road (C116E) and roughly 500 meters east of neighboring Mellita, the Abu Miswar Mosque complex (alternately: The Great Mosque, El Kebir Mosque, Miswariyya, Abi Maswar/Abu Masour/Aboumessouer Mosque) marks the approximate midpoint between Djerba-Zarzis Airport (5 km to the west) and Houmt Souk (4 km to the northeast). Documented as Djerba’s oldest mosque, the Ibadi place of worship was founded in the late 9th century CE by the charismatic Muslim teacher Abu Miswar Yasja, who migrated to Djerba from the Jebel Nafusa mountains in neighboring Libya. Abu Miswar solidified Djerba’s status as the uncontested center of Ibadi learning during the 10th century CE, a tradition continued by his son Abu Zakaria Fasil, who is credited with completing construction on the mosque. Despite the attributed name “Great Mosque,” the Amazigh structure, categorized as one of the inland fortified mosques on the island, is no bigger than any other Djerban mosque (ca. 18 x 17 meters) and typical in appearance with windowless whitewashed walls, a protruding box-shaped mihrab niche (southeast wall), and a fort-like mini-minaret. A historic sundial in the courtyard was used to determine daily prayer times. A series of small rooms were used to house Ibadi students studying at the mosque.

In his monumental work The Making of Star Wars: The Definitive Story Behind the Original Film (2007), J.W. Rinzler published a behind-the-scenes-photograph of George Lucas (writer/director) and John Barry (production designer), presumably at EMI-Elstree Studios (Borehamwood, England), reviewing in late 1975/early 1976 the makeshift studio recce wall, composed of an an assortment of unannotated pinned photos (organized by location) taken by Barry during the principal Episode IV pre-production recce to Tunisia in mid-November 1975. Multi-faceted research confirms that three recce photos grouped together on the wall (second column from the left, lower panel, top left-hand corner) depict the Abu Miswar Mosque complex from three different camera angles: two from the northeast section of the mosque courtyard (near the gated main entrance) and one from a vantage point some 50 meters southeast of the complex. The mosque is visible in two of the three camera angles.

Three additional Kodak Tri-X panchromatic photographs from Barry’s recce archives further verify the identification of the Abu Miswar Mosque complex as an Episode IV recce site. Released via Star Wars community online platforms void of any locational attribution (like all of Barry’s recce negatives), on-site visual comparisons confirm that Barry shot all three photos in the mosque courtyard. Two of the photos were taken from a vantage point approximately 15 meters northeast of the mosque: the first depicting Gary Kurtz (producer) making measurements between the northeast corner of the elevated mosque platform and a nearby cistern cover; the second focused on the domed arches of the shaded sitting area attached to the secondary entrance at the southeast corner of the complex. The remaining photo is a close-up featuring one of the various cistern covers plotted around the courtyard on all but the south side of the mosque.

Djerban authorities have designated Abu Miswar Mosque as an essential cultural heritage landmark with funds appropriated to ensure periodic upkeep. Although restoration works at the complex have introduced some structural changes (particularly the expansion of the secondary entrance area) since the 1975 recce, the entire complex remains distinctly recognizable, offering clear reference points to line up Barry’s complete set of six preserved recce photos. 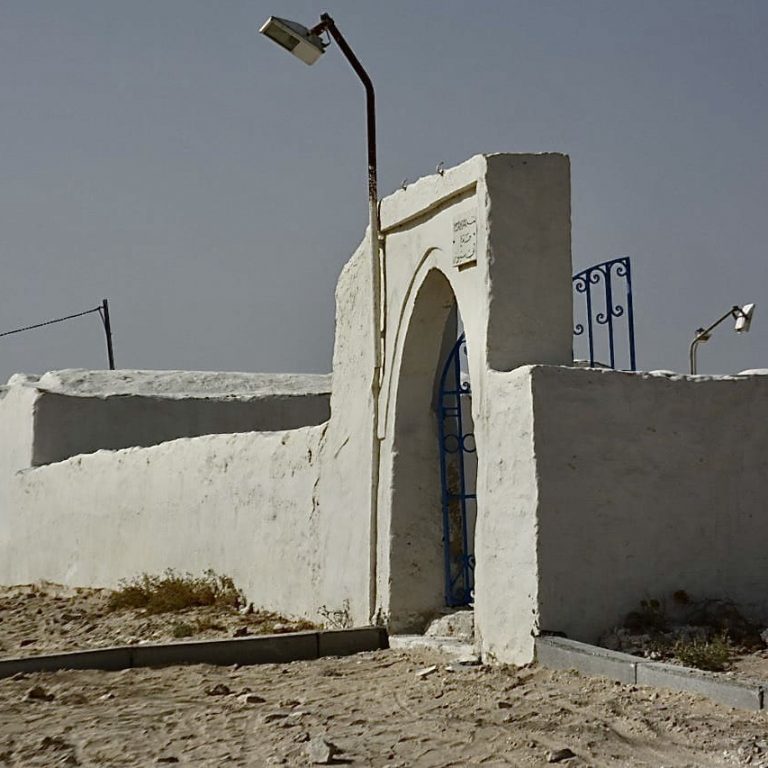 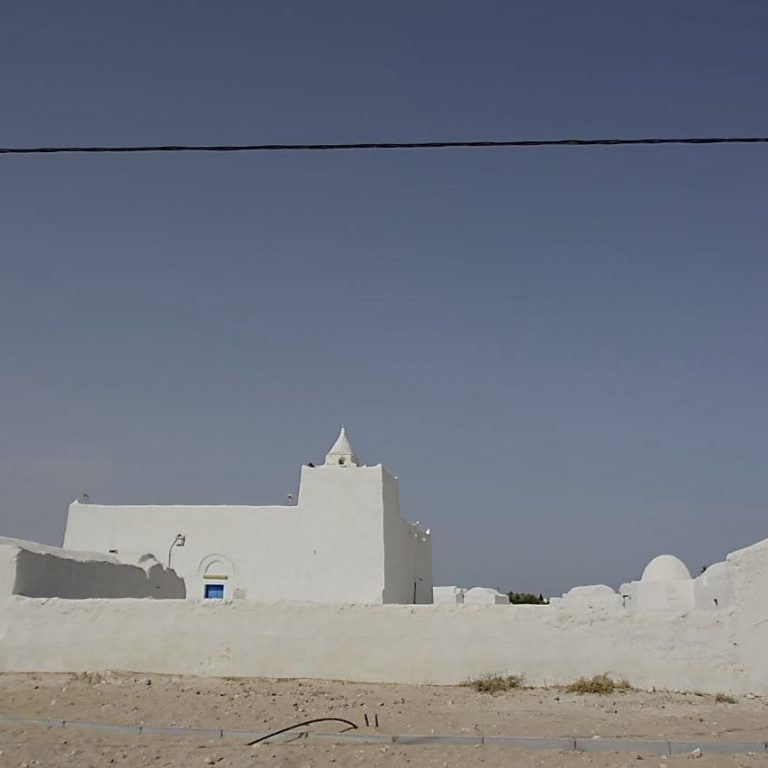 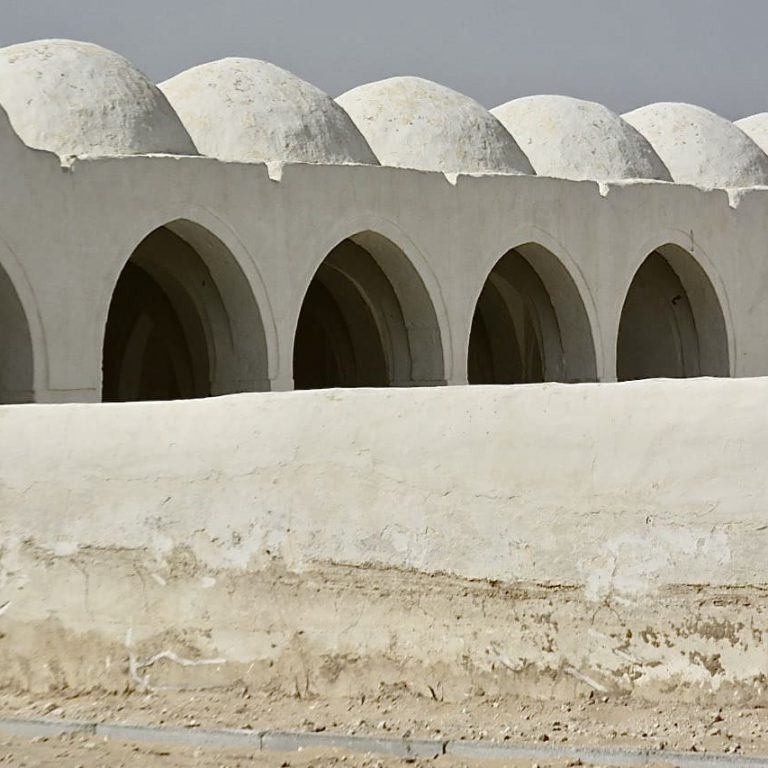 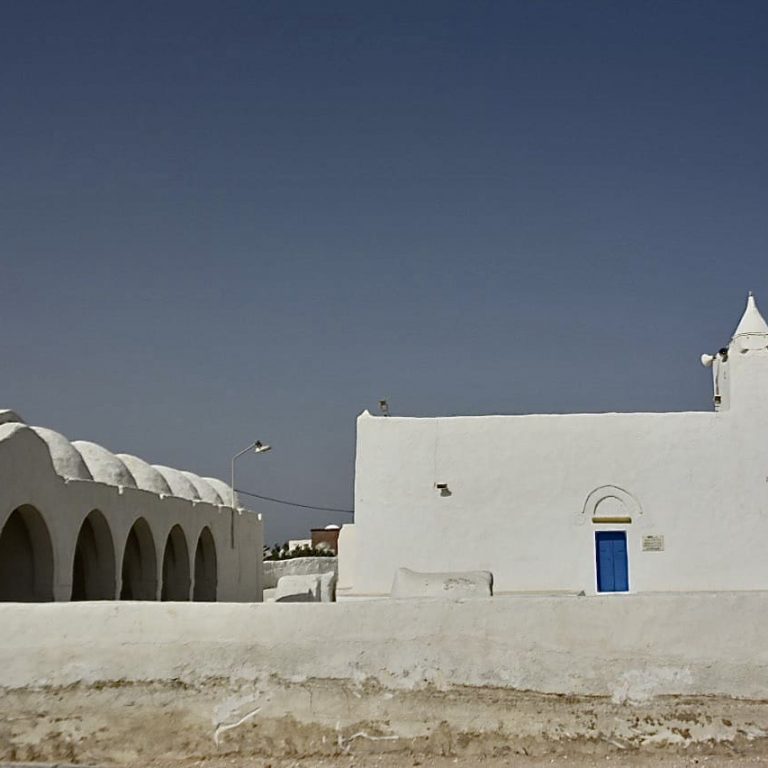 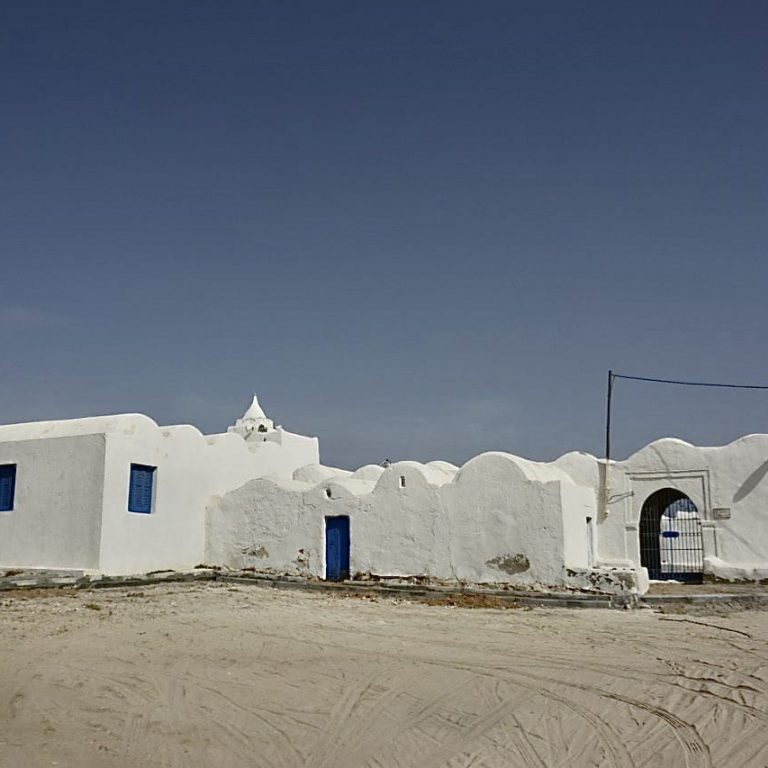 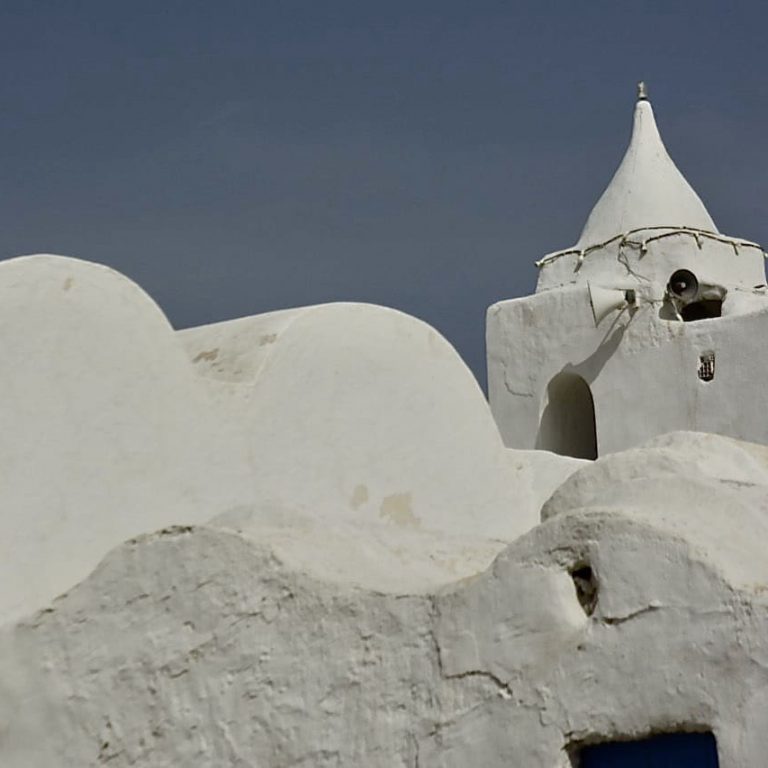 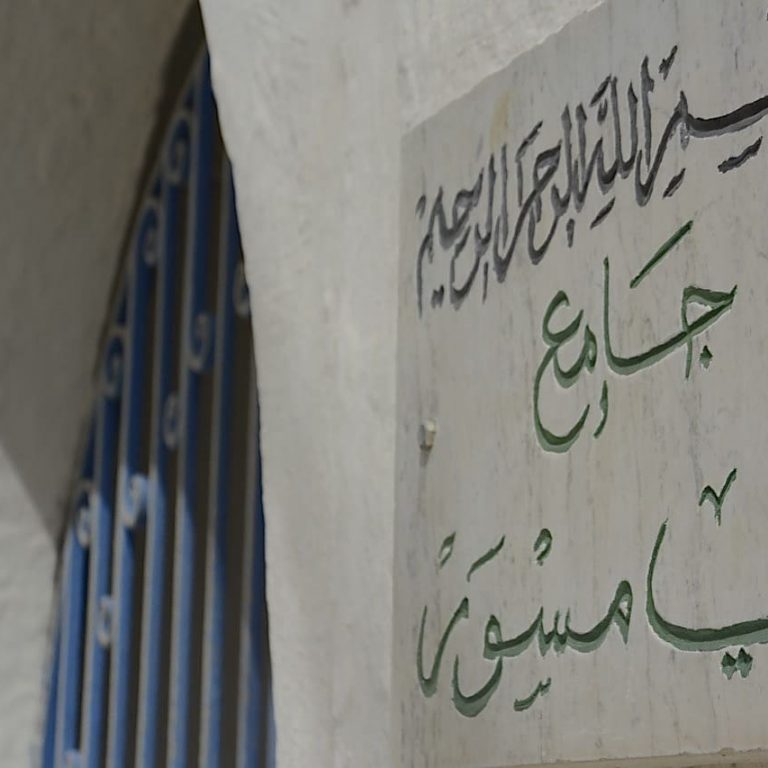 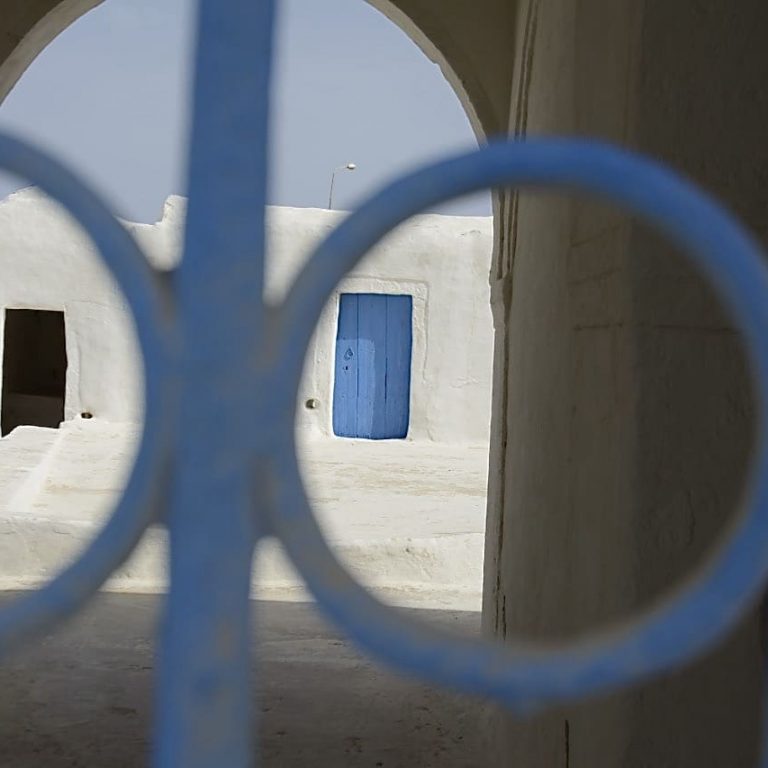 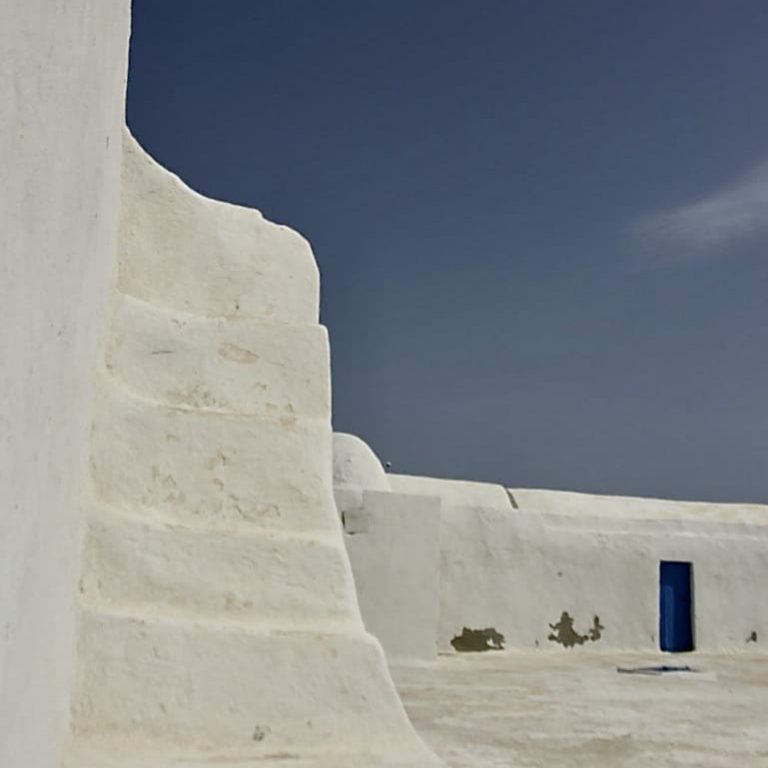 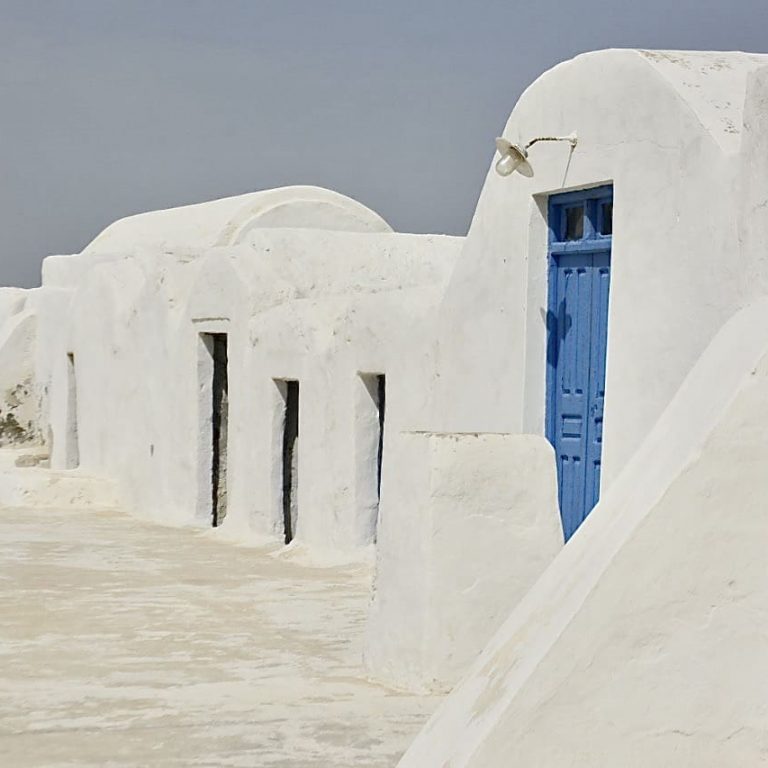 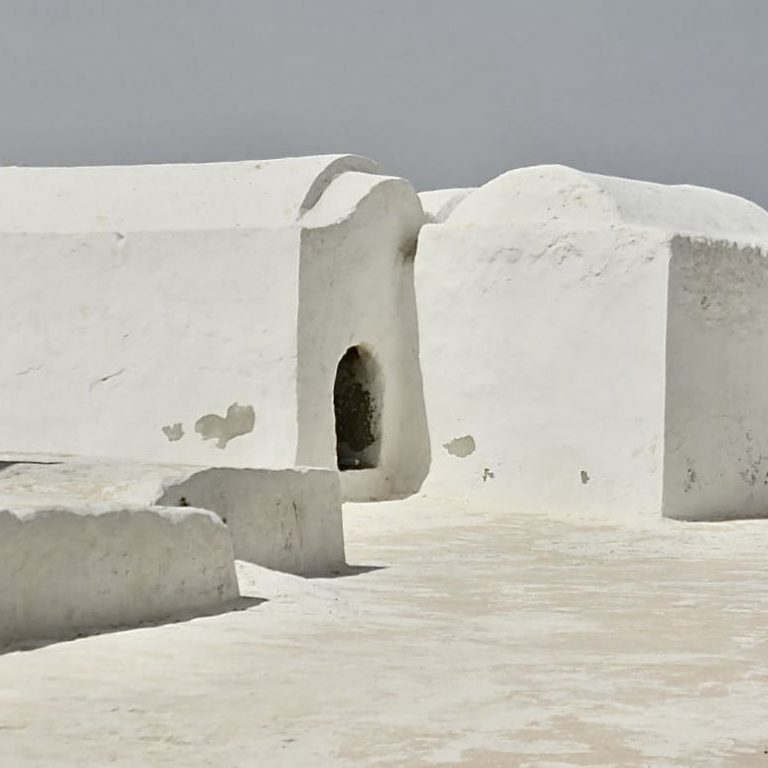 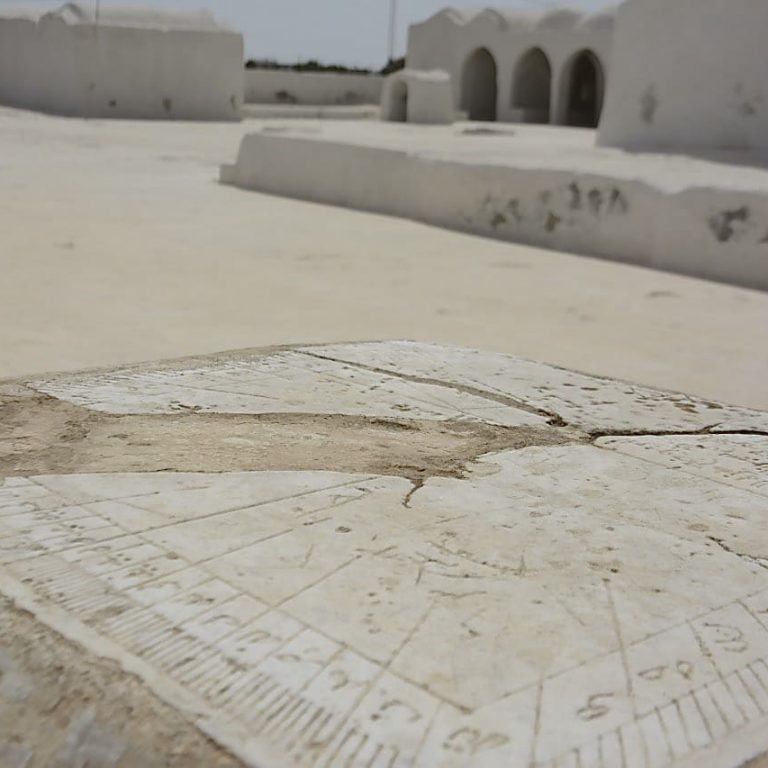 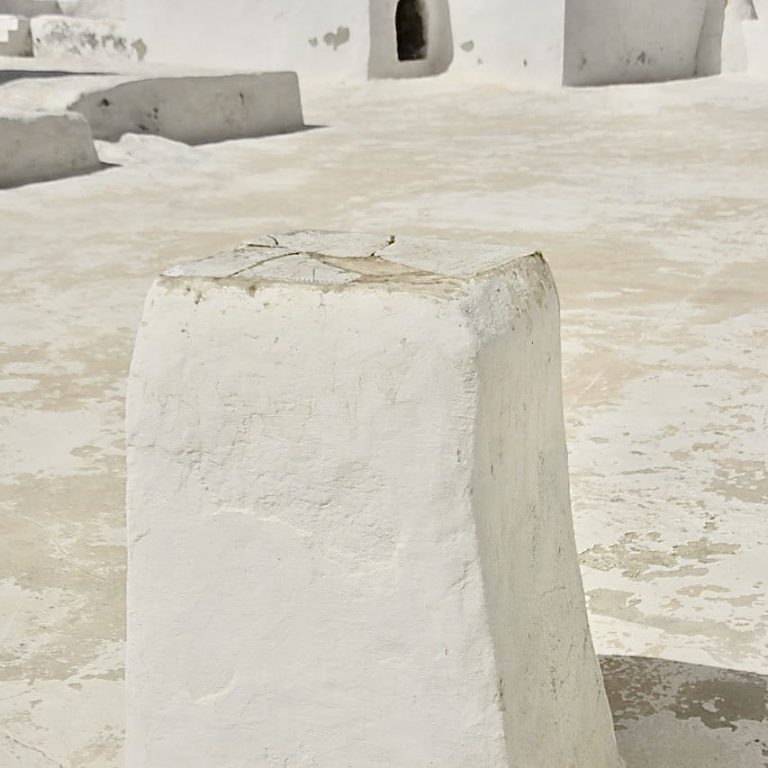 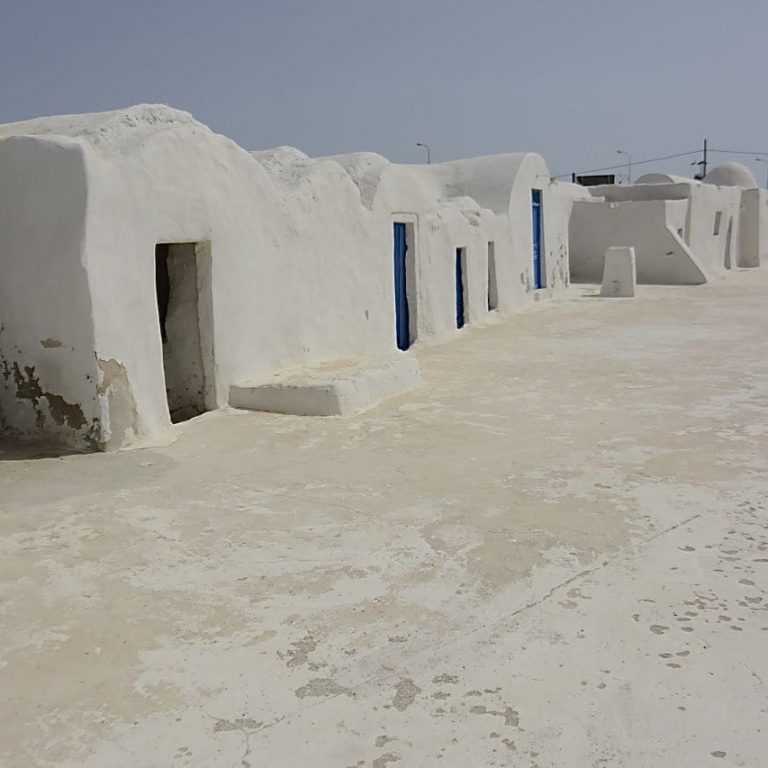 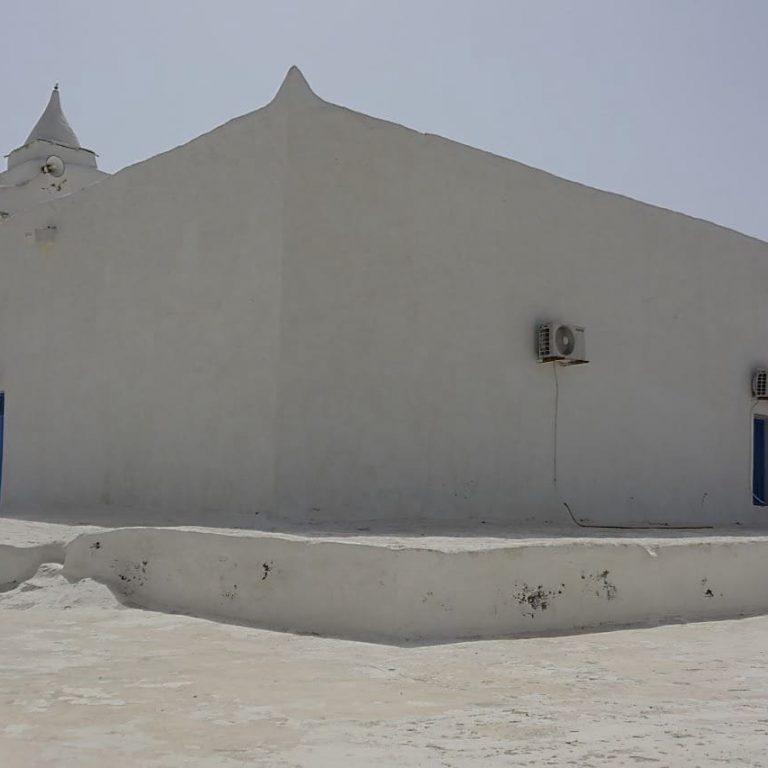 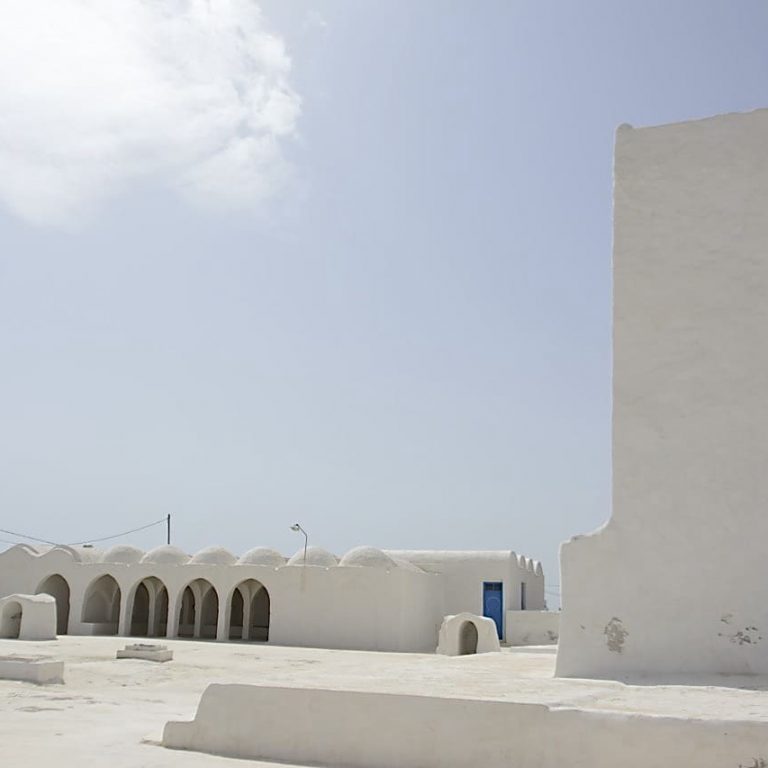 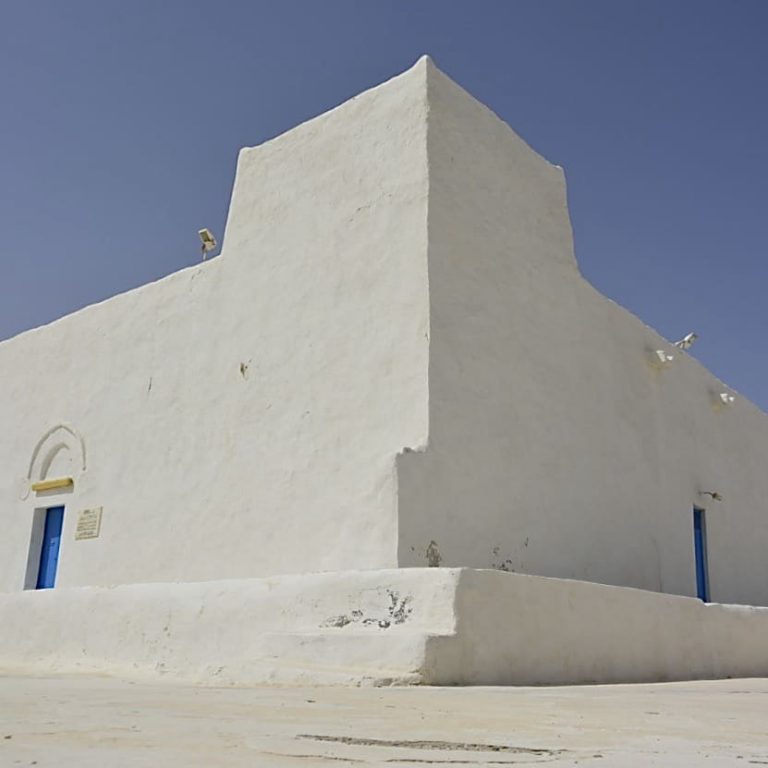 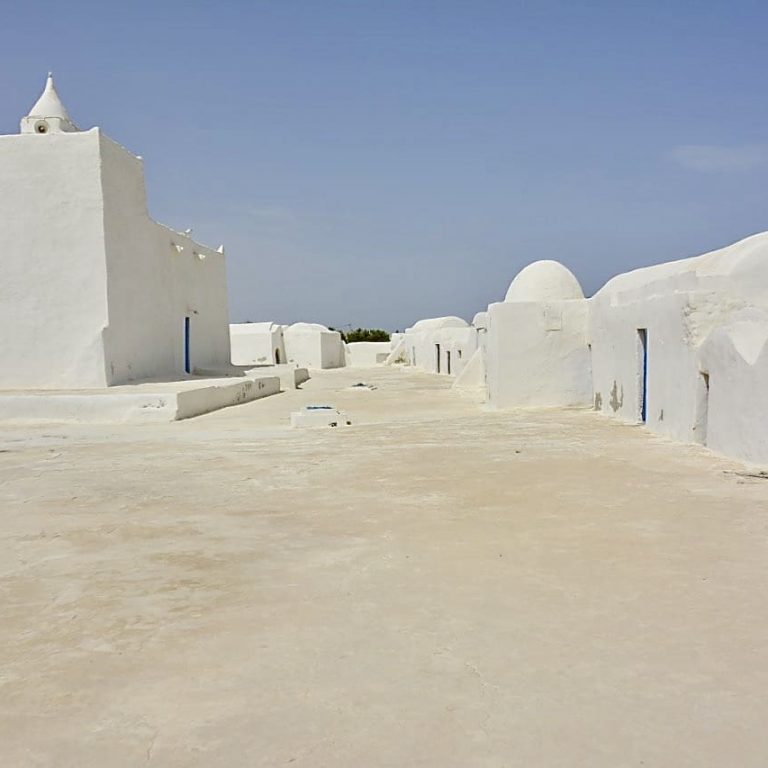 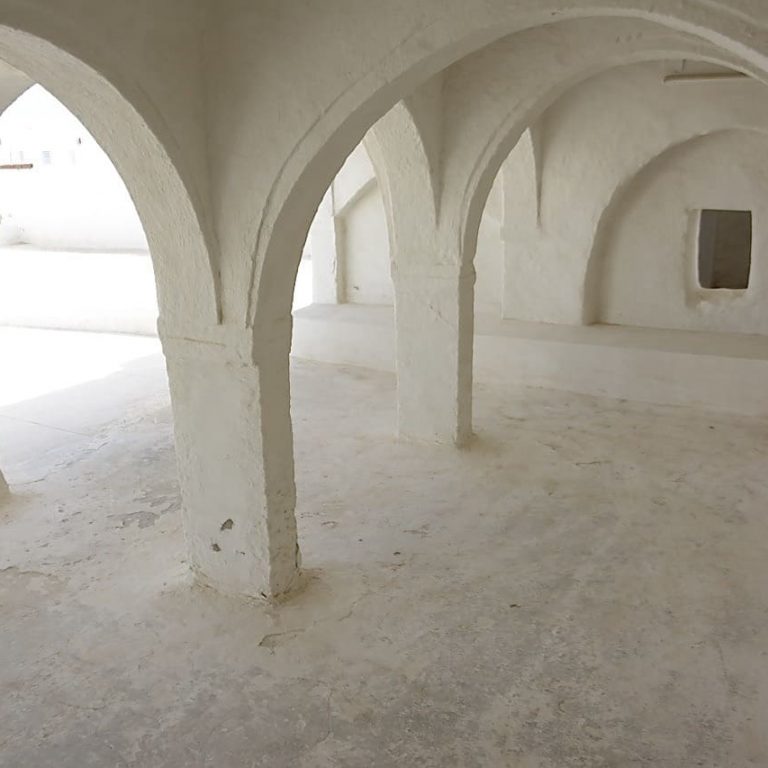 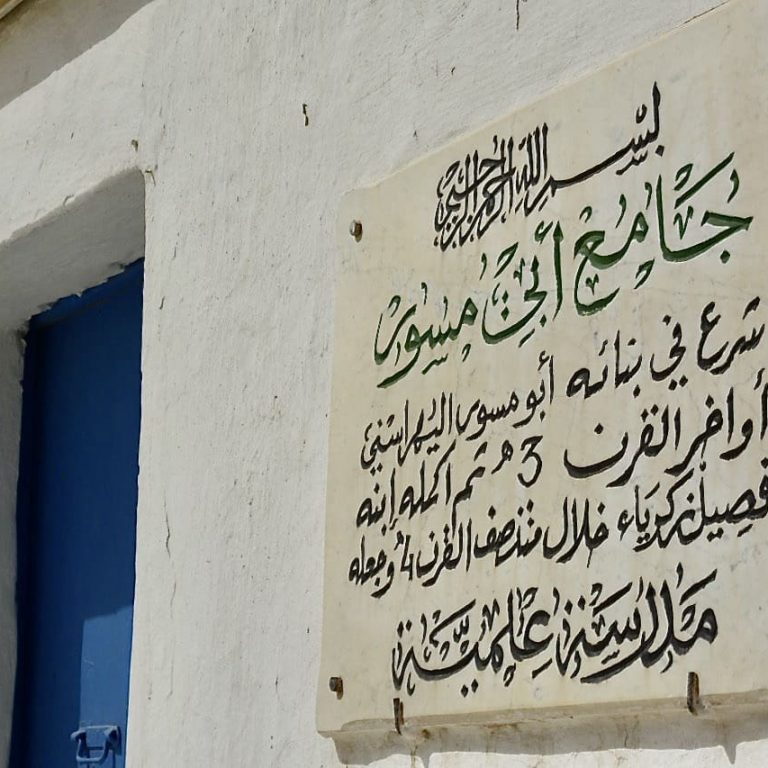