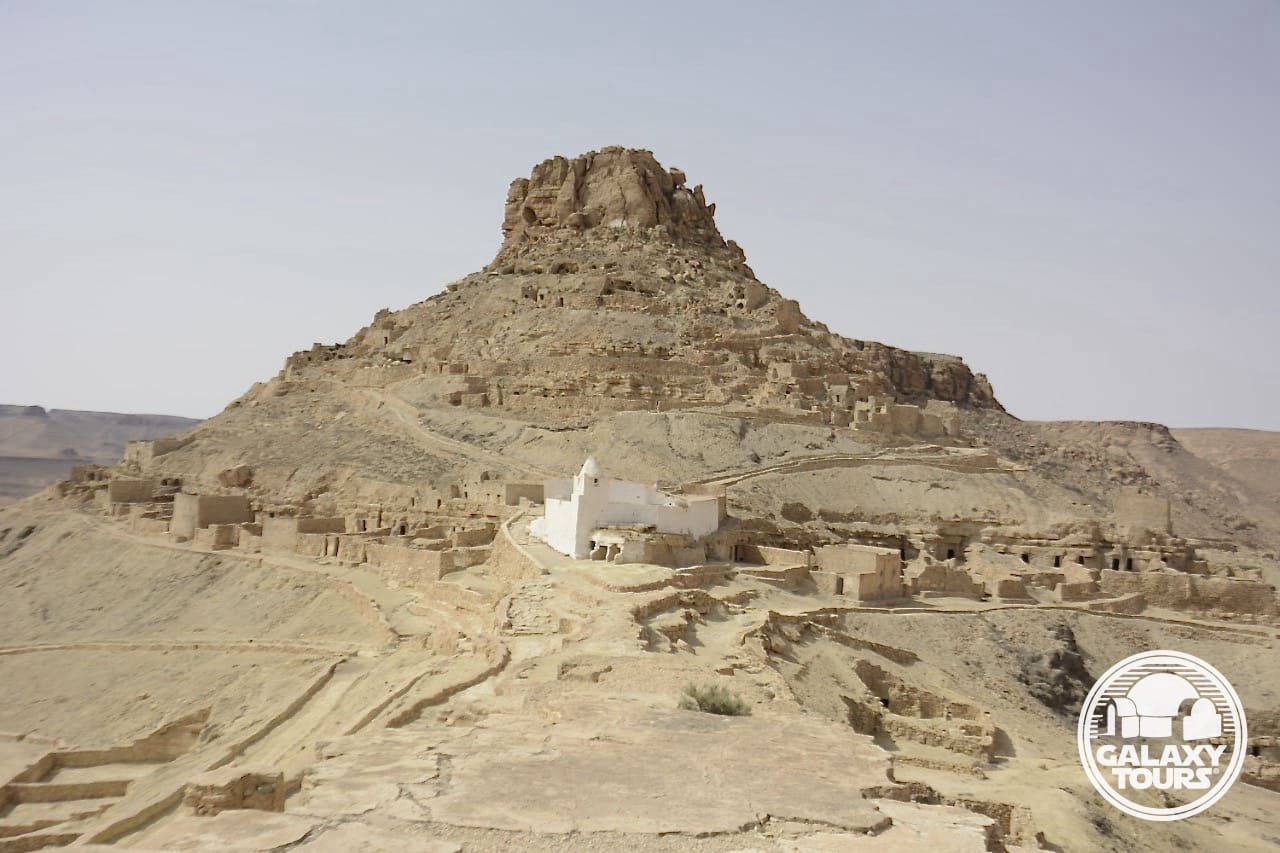 Canon reference: The name Guermessa is associated (since 2015) with one of the three moons of fictional Tatooine. Nearby Chenini and Ghomrassen represent the names of the other two moons. All three locales “orbit” around Tataouine city.

The Guermessi tribe erected the ancient mountain village in the 7th or 8th century CE as a defensive kala’a (Arabic: “citadel” or “fortress”), digging multiple layers of fortified subterranean (troglodyte) structures into the sloping strata (limestone, clay, marl, and dolomite) of two adjacent peaks (ca. 355 meters apart) strategically located on the northern end of the Jebel El Hadada mountain range (elevation: 548 meters) high above the surrounding Ferch plain. The founding of Kala’a Guermessa is traditionally linked to a miracle of much-needed rainfall at the arrival of two marabouts to the region from Kairouan (Tunisia): Sidi Ibrahim and his servant Sidi Bando. The whitewashed Sidi Hamza Marabout (son of Sidi Ibrahim) functions as the center point of the ancient ruins between the two peaks. As peaceful relations developed between the local Amazigh and nomadic Arab tribes, the horizontally terraced kala’a fortifications on the slopes of Ras Oum Moutmana (alternately: Ras El Metmana)—the flat-topped south peak at the site—were expanded to include family-specific ghorfa chambers built in front of the fortified structures, forming a collective cliffside ksar complex for crops storage. Only the east and south sections of Ksar Guermessa have survived with some pockets of the south section partially restored. The north peak at the site is home to layers of lateral subterranean ruins.

Jon Bradley Snyder (author/editor) reported on the principal Episode I recce to Tunisia (early to mid-December 1995) in Star Wars Insider 29 (Spring 1996). In his article (“On-Location: Tatooine”) Snyder published photos (taken by David West Reynolds) with generic captions for several of the Tunisian sites visited during the recce. No names or clear identifications were provided for any of the visually documented sites. Multi-faceted research confirms that one of the recce photos in the article (page 57; top row, right-hand side) captures a panoramic view of the Kala’a Guermessa north peak with its unique arrangement of subterranean ruins compacted near the top of the peak and interspersed intermittently down the face of the west-side slope. Reynolds stood along the footpath on the north side of Ras Oum Moutmana approximately 30 meters southwest of the Sidi Hamza Marabout to frame the recce photo. The caption associated with the photo reads: “Though it looks like a matte painting, this mountain city is real, standing deep in the remote wastes of southern Tunisia.” Despite no enduring effort to preserve the ruins, views of the north peak west-side slope at the site remain more or less unchanged since the 1995 recce. 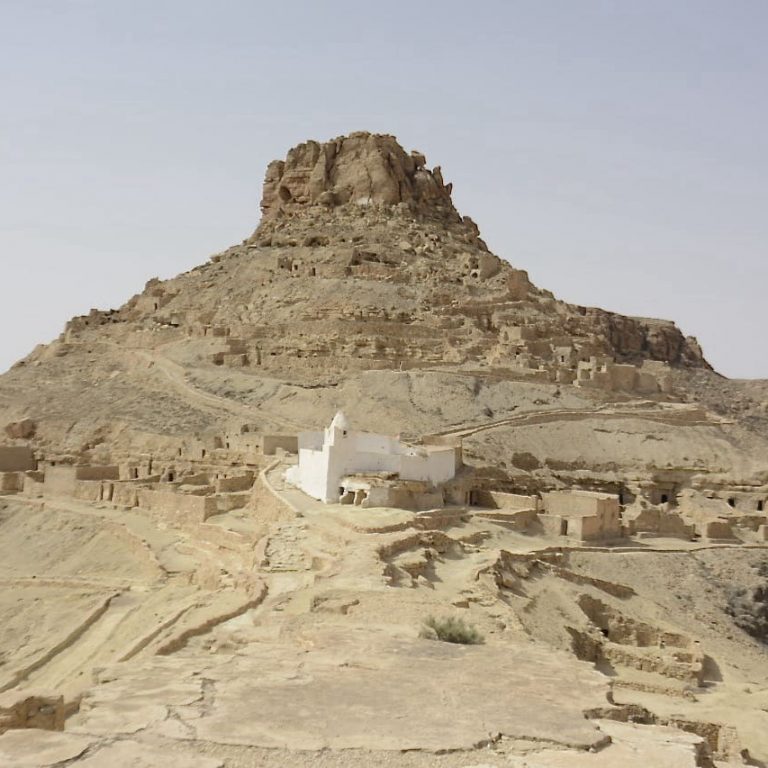 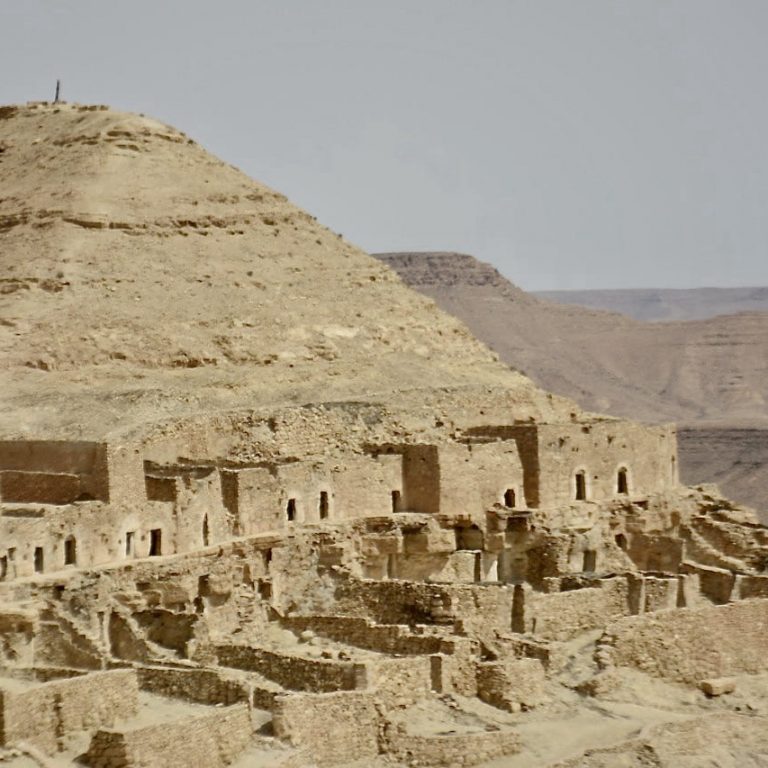 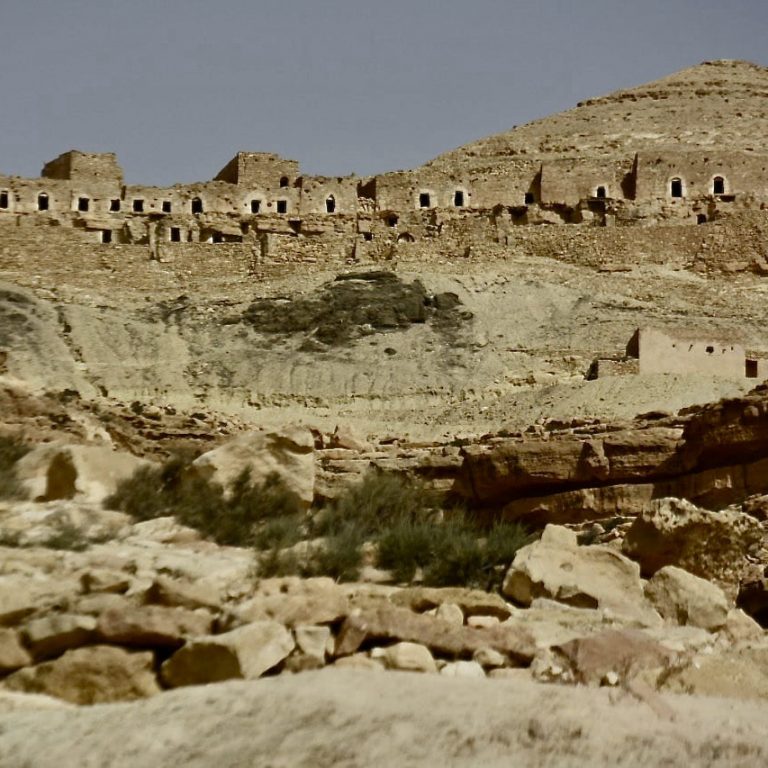 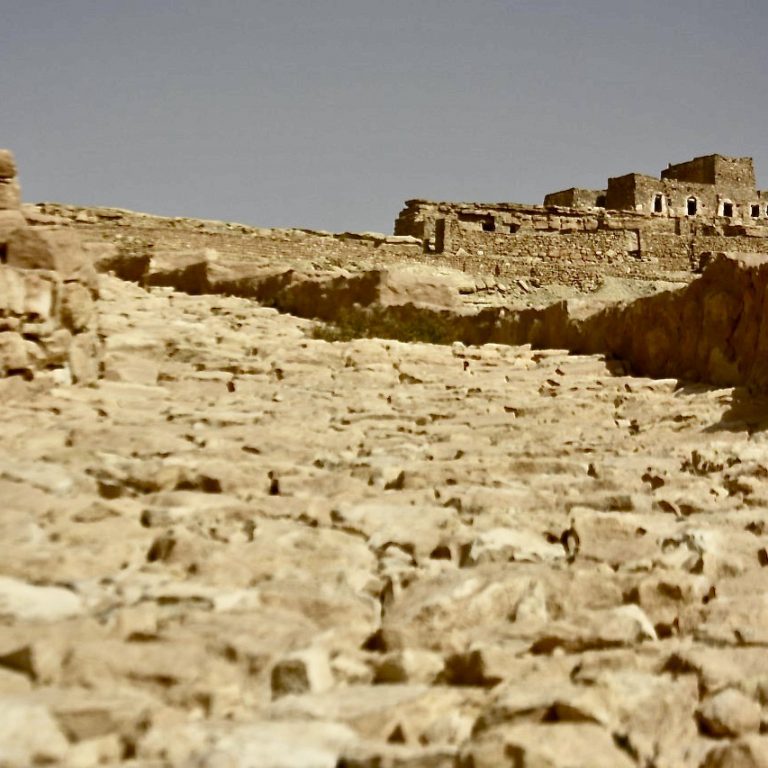 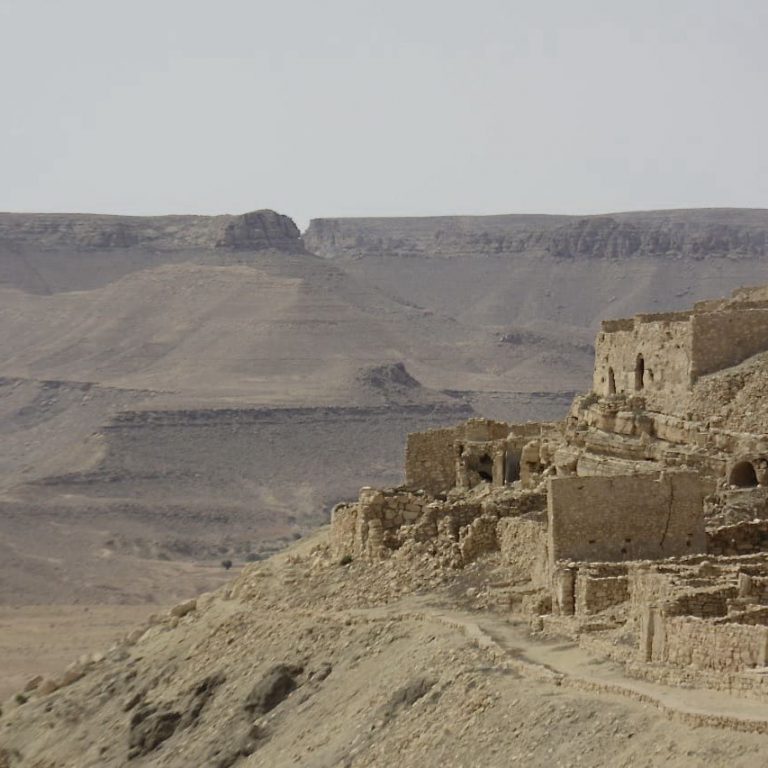 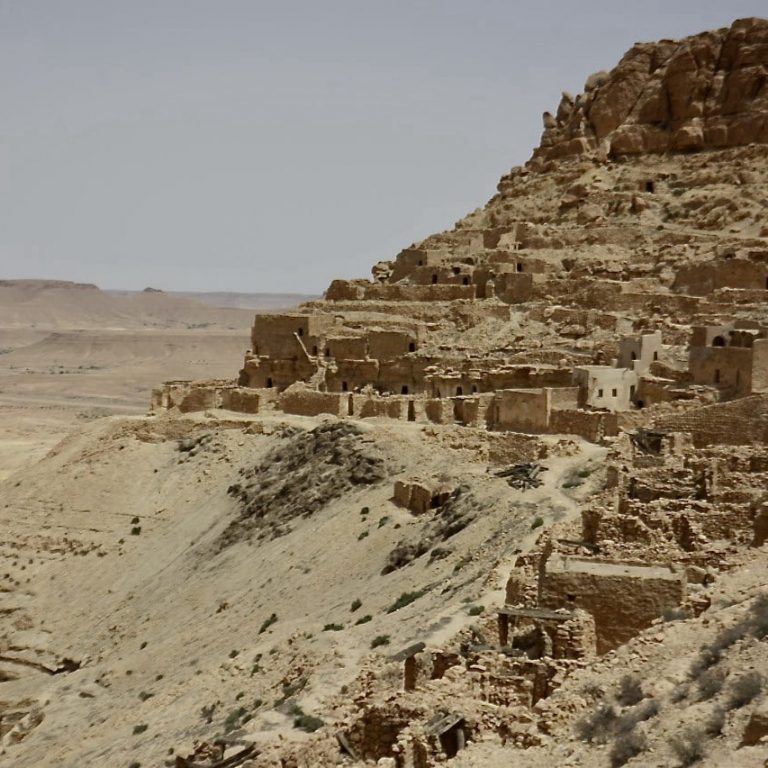 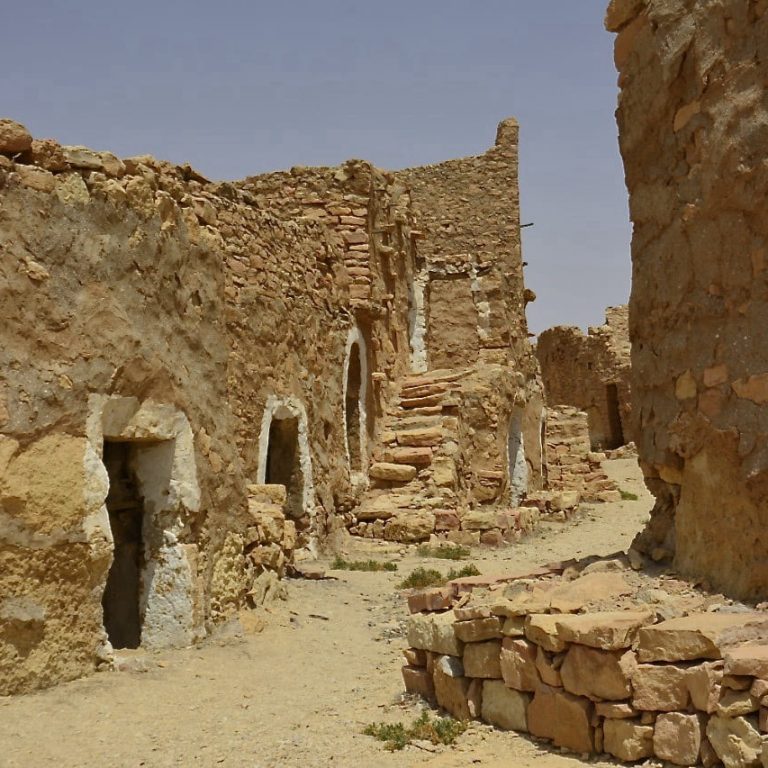 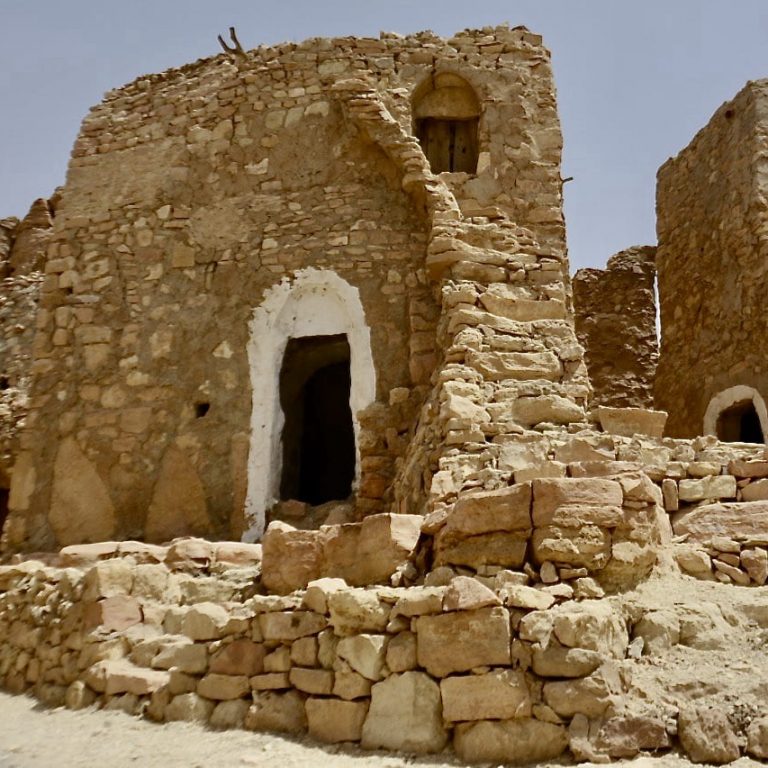 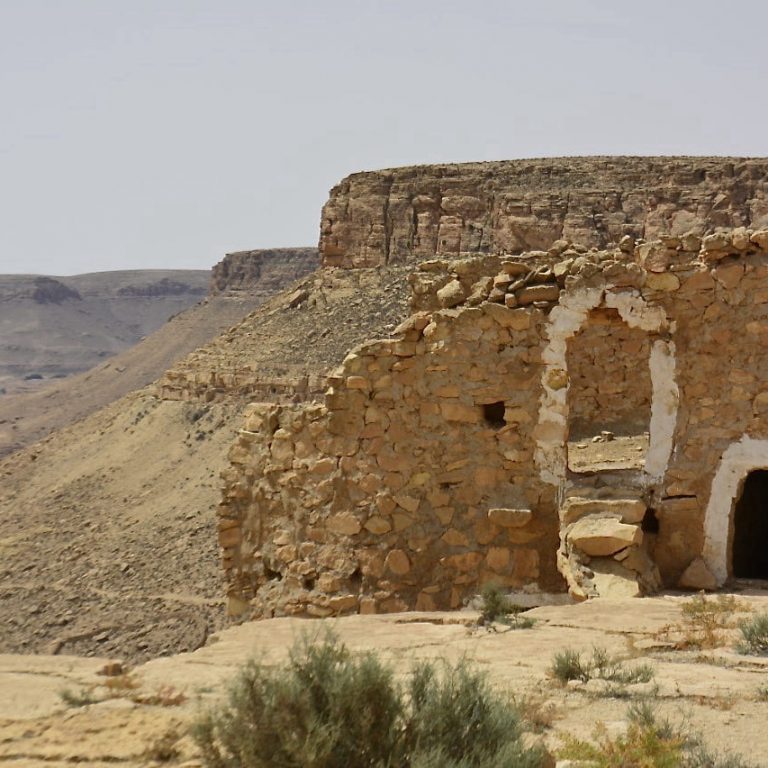 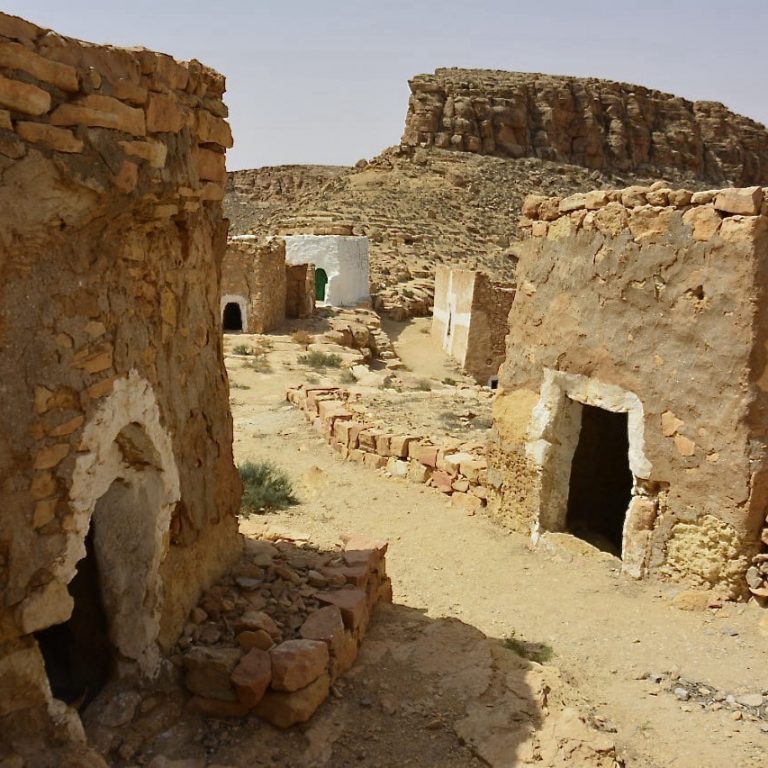 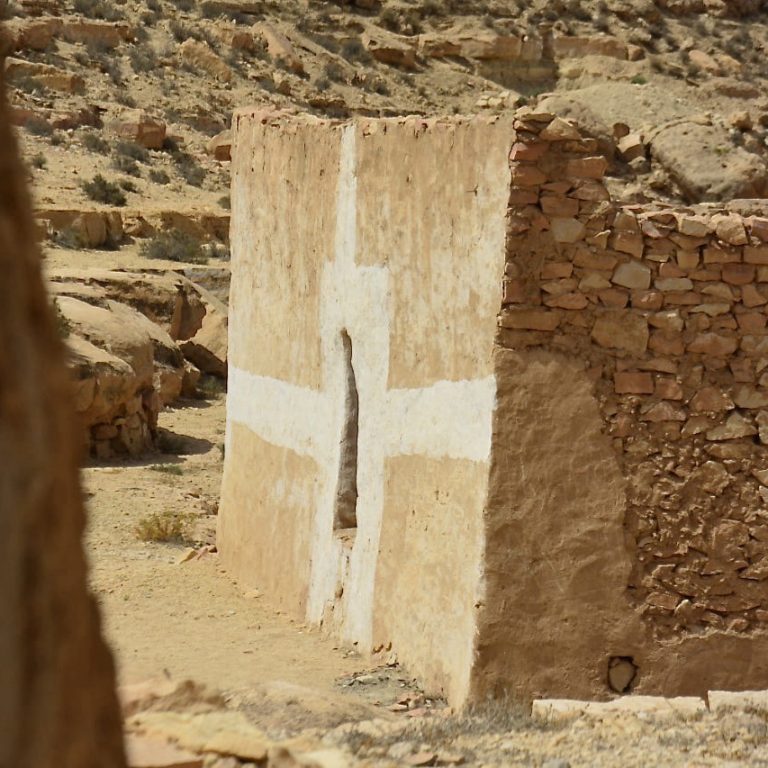 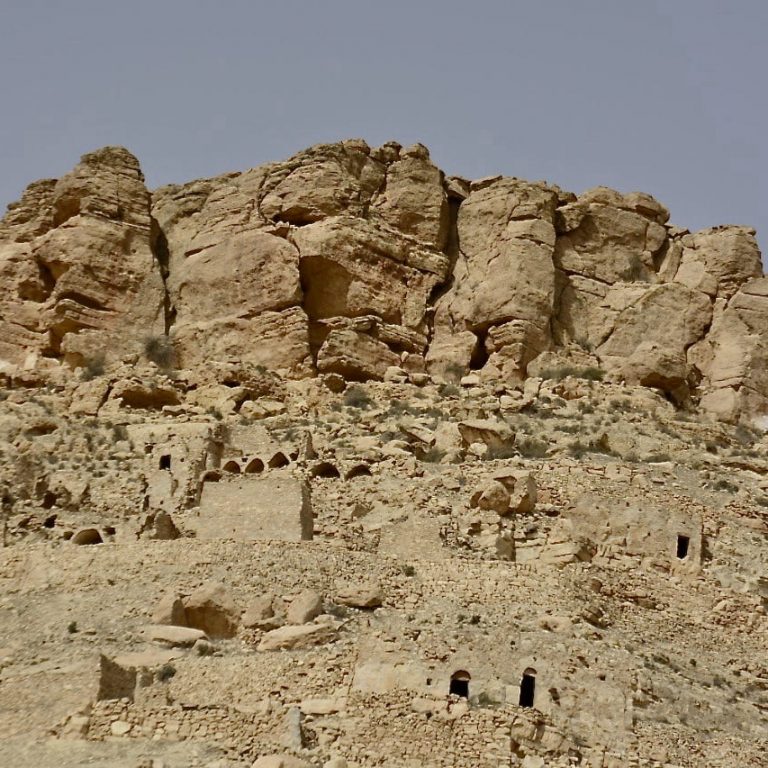 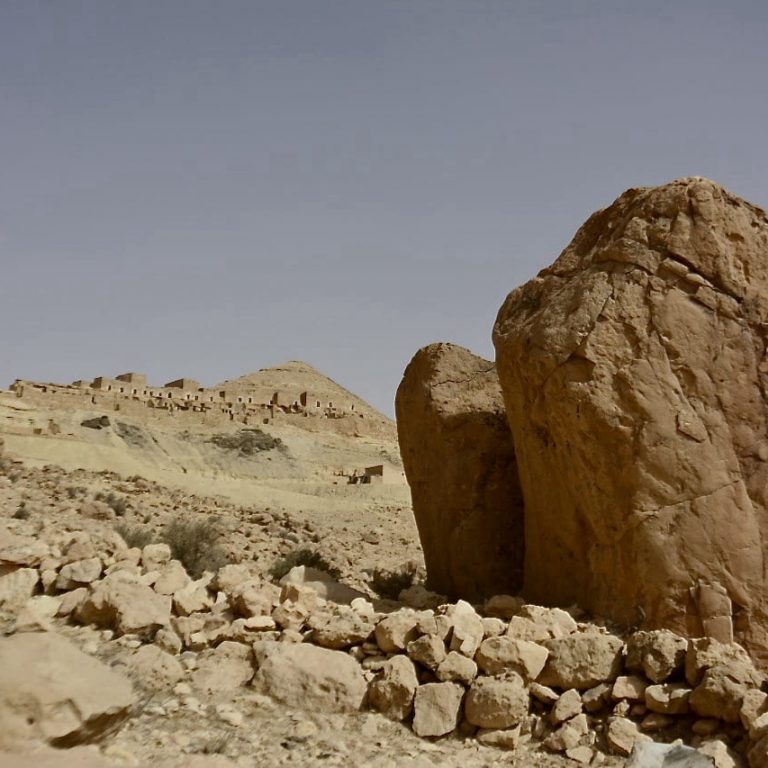 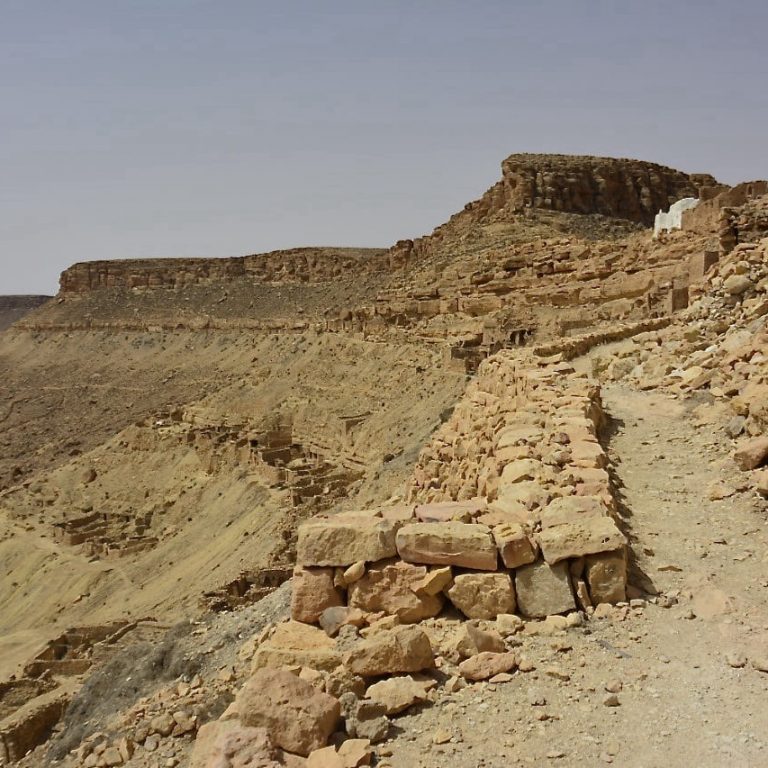 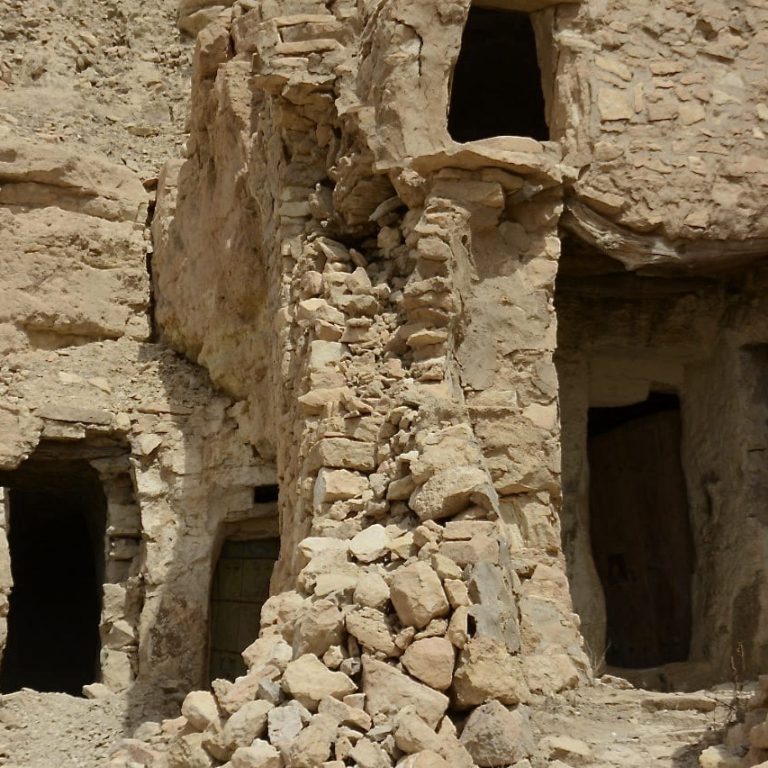 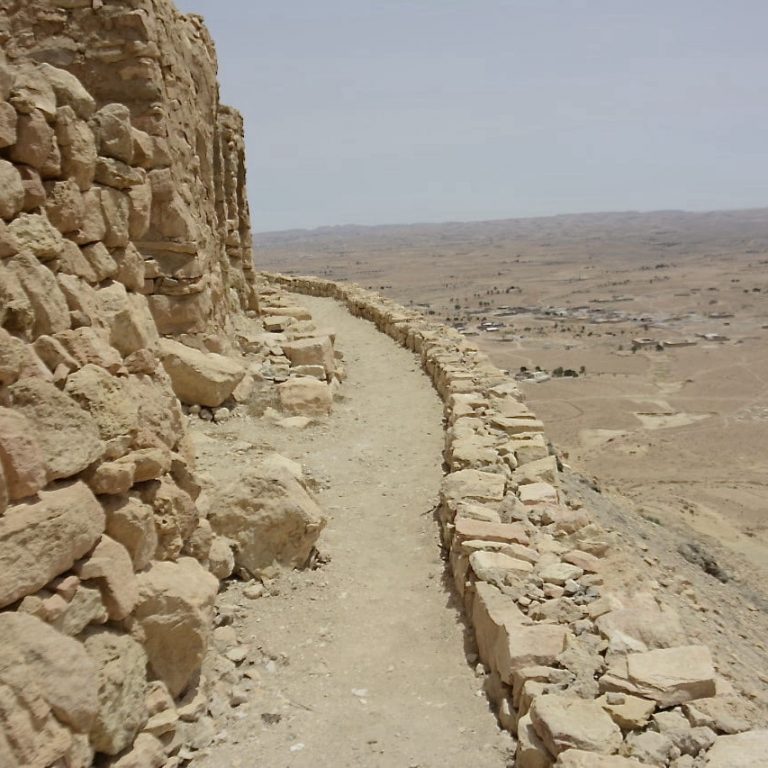