Star Wars tourism in Tunisia can be divided into three geographically distinct circuits spread across the southern part of the country. Star Wars franchise film sites are the must-see destinations in each circuit, complemented by verified Episode IV and Episode I recce sites to amplify the overall fandom experience. The Star Wars connection adds a unique layer of significance to the collection of film and recce sites, the majority of which stand as important historical and cultural Tunisian landmarks. Travelers can combine all three circuits into one extended multi-day itinerary or complete each circuit separately. If combined, the most advisable course is to tour the circuits in order from #1 to #3. 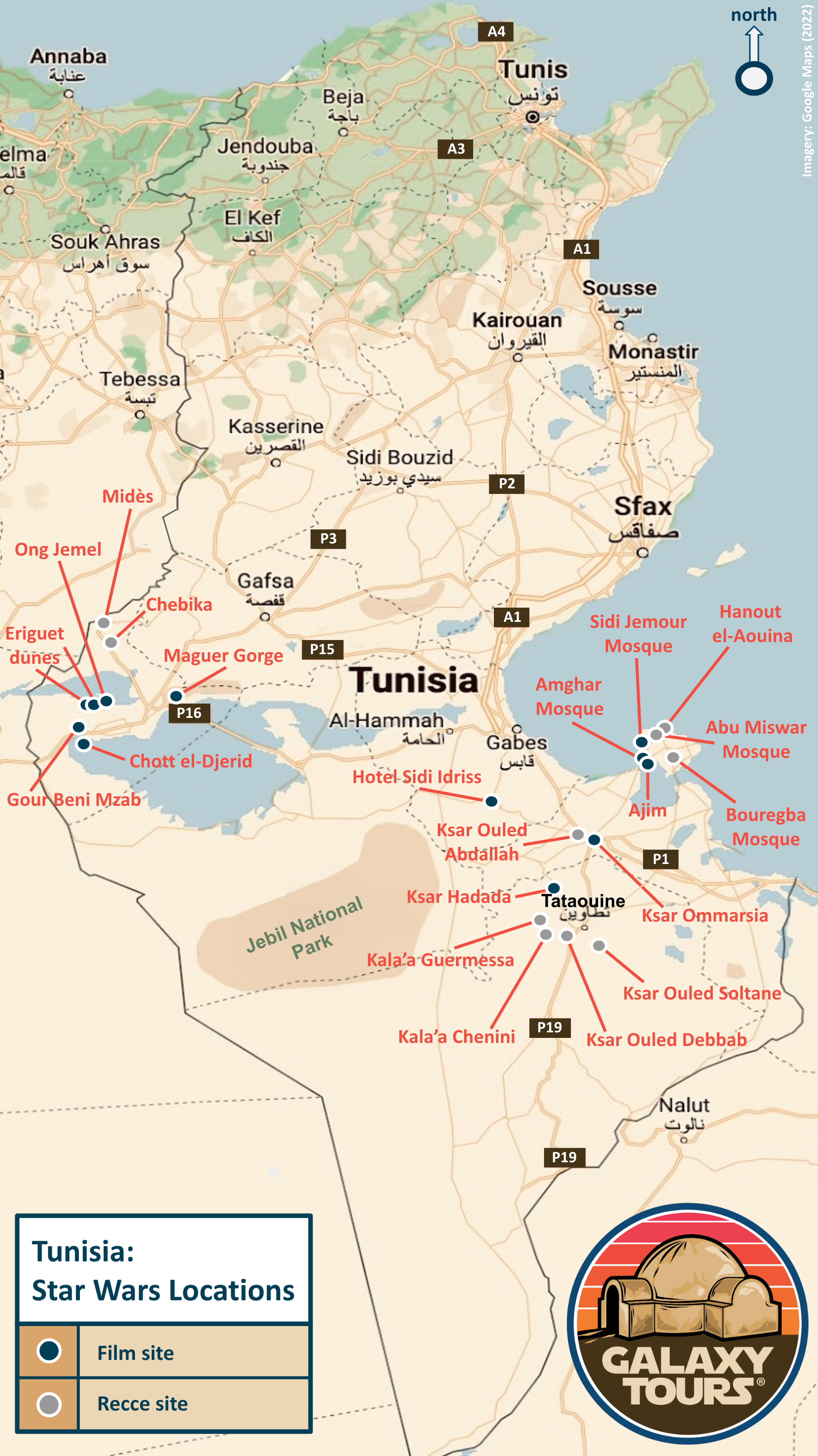 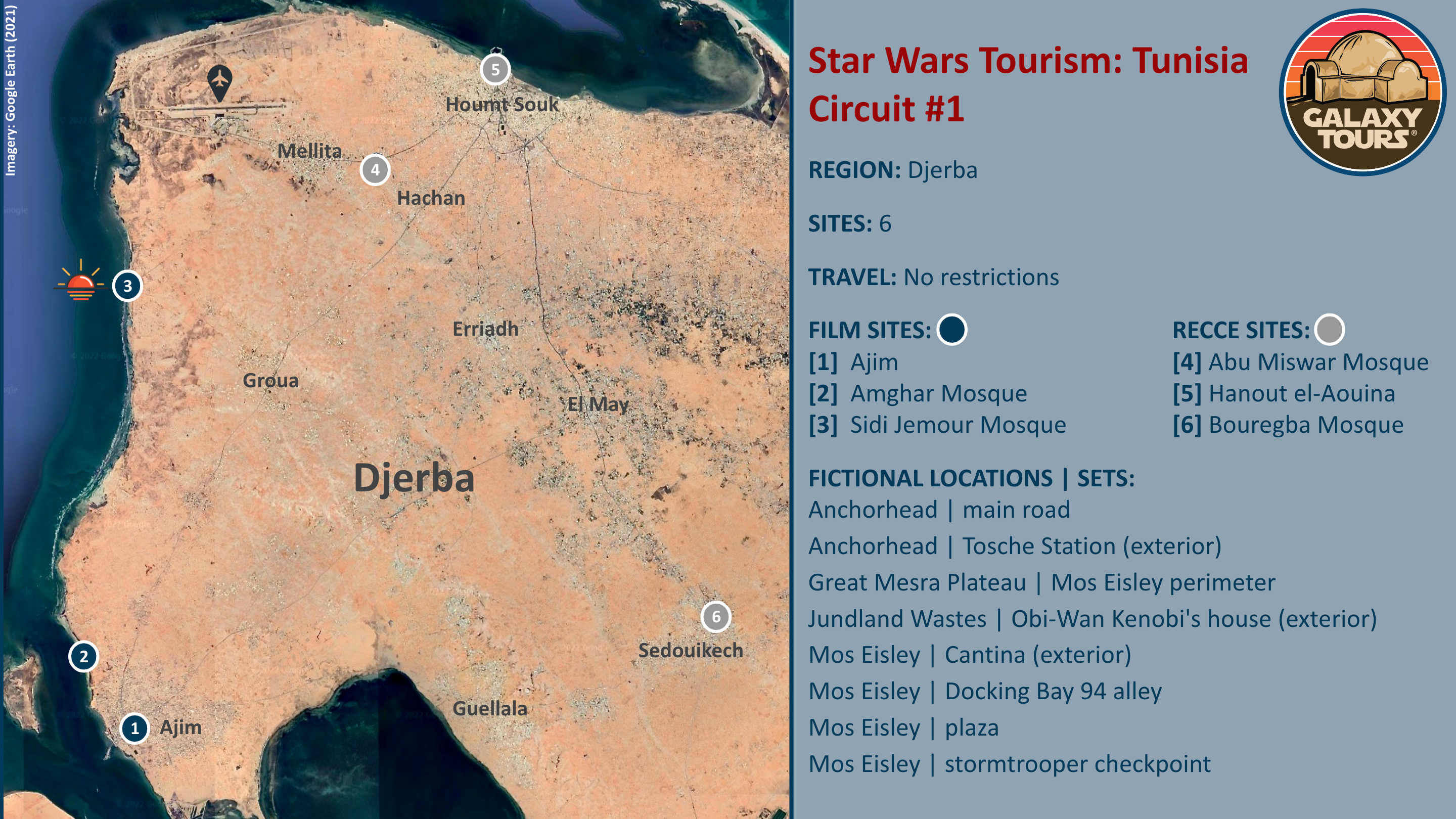 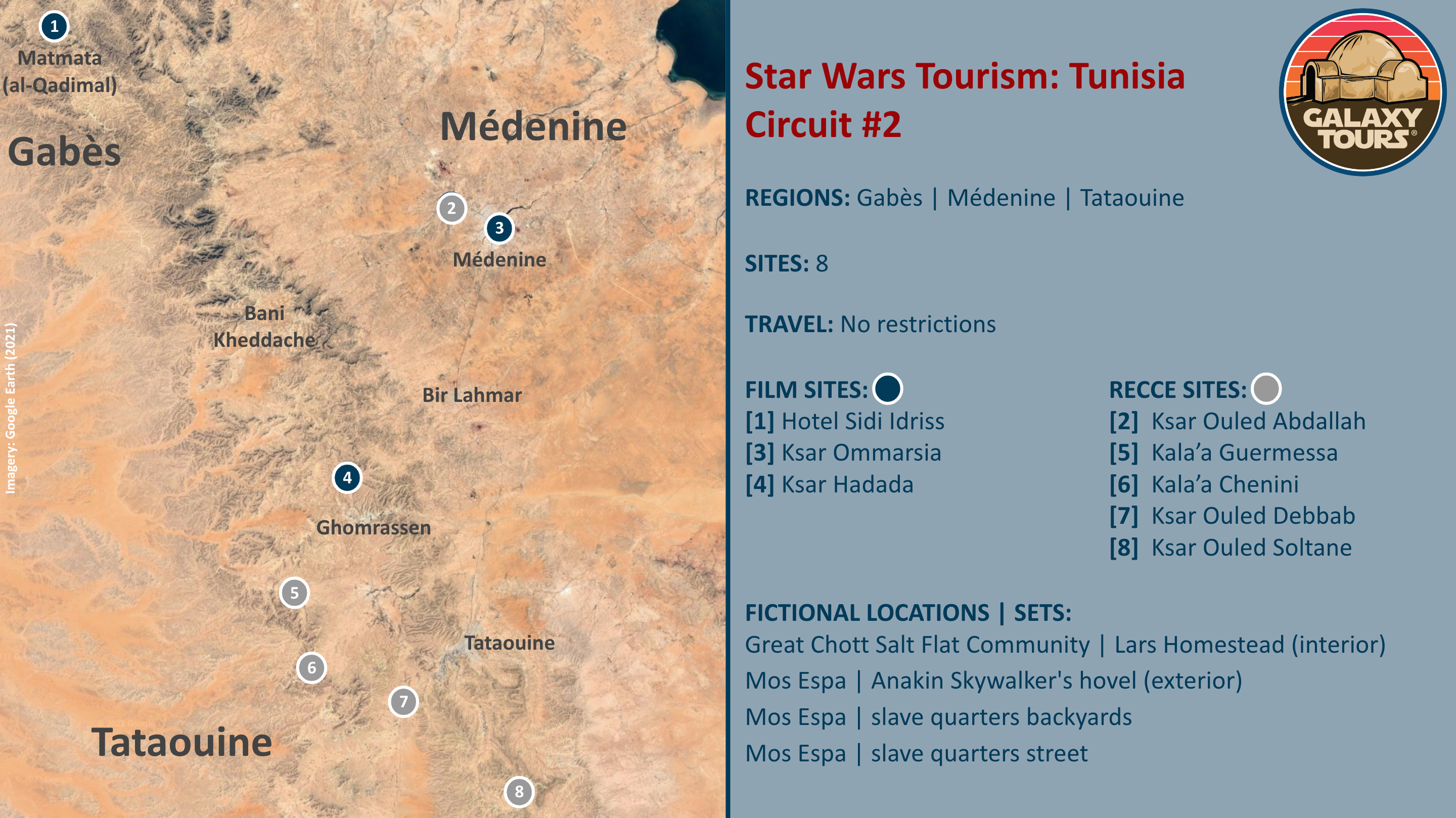 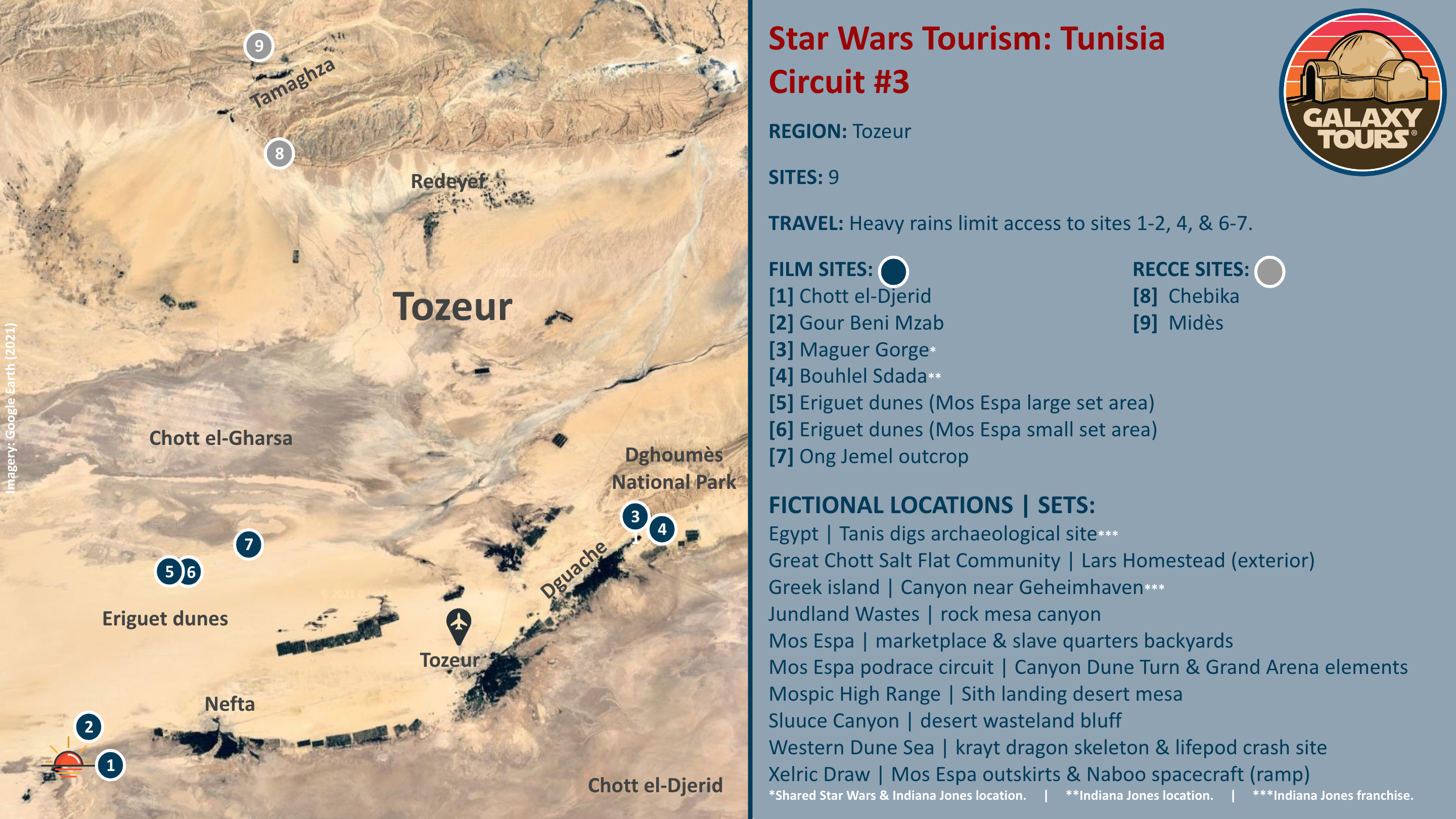 Renting a vehicle is a necessity to navigate the circuits. A number of international and regional companies offer rental options at Tunisian airports. Well-marked highways, paved streets, and hard-packed dirt roads provide unrestricted access to all of the sites. Heavy rains and muddy conditions limit access to multiple sites in circuit #3 due to the absence of paved roads directly to these locations. Gour Beni Mzab (circuit #3) is the only site not accessible with a standard vehicle. Petrol stations are not overly abundant. It is best to tank up at frequent intervals. Roadside fuel vendors, a common sight on main roads, tend to only carry diesel in their assortment of containers and barrels.

Adaptors might be needed to charge smartphones and other dual voltage electronics. Portable chargers are strongly recommended to ensure all-day device functionality.

Tunisair domestic travel between Tunis and Tozeur-Nefta Airport (TOE) is typically limited to just a single flight on three separate days per week with an increased probability of cancellations on weekdays. Sunday flights between Tunis and Tozeur are the most reliable. Airline schedule changes at the end of a planned itinerary (circuit #3) can be managed by driving the P3/P12/P2/A1 route through central Tunisia back to Tunis in a lengthy full-day road trip. This detour scenario coincidentally presents the ideal opportunity to stop at historic Kairouan, a major Indiana Jones franchise film site.

Tunisia functions in general as a cash-based economy in most sectors. International credit and debit cards, however, are widely accepted at hotels, restaurants, major grocery outlets, shopping centers, and businesses catering to travelers. The Tunisian dinar (TND) is a closed currency with legal restrictions on both importing and exporting the currency in or out of the country. ATMs offer the most flexible way to obtain dinars. Although 24-hour ATMs are numerous in city centers and other high-traffic areas (like airports), the availability to withdraw funds from ATMs is sometimes hit or miss, especially on evenings and weekends. ATM cash restocking schedules vary widely. Visitors should carry a practical amount of dinars at all times to ensure travel continuity.

DT (French: dinar tunisien) is the abbreviation most commonly used for the currency in Tunisia. 1 DT is subdivided into 1,000 milim, which are used to express small, fractional prices. Tunisian taxis—a safe and inexpensive method of travel in cities—often quote fares in milim. A taxi fare of 4,750 milim, for example, equates to 4.75 DT. Bartering localities (like street markets and roadside shops) also deal in milim. Established commercial enterprises use “whole” dinar prices. The term dinar is derived from the Roman silver denarius, linking modern-day Tunisia to its post-Carthaginian past as the fertile center of the Roman Africa Proconsularis province, later identified as Ifriqiya by the Umayyads.

Djerba (circuit #1) hosts a large number of hotel options, grouped primarily in Houmt Souk and the Zone Touristique Djerba along the northern coast of the island. The Zone Touristique in particular is home to a variety of sprawling beachside resorts. Smaller-sized hotels and bed & breakfast boutiques, which are easier to update/maintain, function as viable high-quality alternatives to the mega resorts. Quality lodging options in the mainland southeastern governorates (circuit #2) are certainly available but not numerous. Advanced planning is critical to avoid disappointment. Boutique hotels currently in operation at two Star Wars locations (Hotel Sidi Idriss and Ksar Ouled Debbab) present travelers with an immersive fandom experience. Tozeur city is the tourism epicenter in the Tozeur Governorate (circuit #3) with a large offering of mega complexes of varying quality, boutique hotels, and a unique luxury resort overlooking the Chott el-Djerid salt flats. Renting a house or apartment from a private owner should only be done through established professional platforms to lessen the risk of fraud.

Arabic is the official language of Tunisia. Natives speak the Tunisian/Maghrebi Arabic dialect. French is widely spoken by the majority of the population. English and Italian, to a much lesser extent, also serve as lingua francas. Foundational German and Russian are spoken on a limited basis in touristic zones. Dialects of the Amazigh (Berber) language, referred to as Shelha, are spoken in distinct population pockets in the southeastern governorates and on Djerba island, to include locales such as Douiret, Chenini, Matmata, Tamezret, Ajim, Guellala, and Sedouikech. Regardless of the language used, responsible travelers will find it easy to integrate into the proactively inclusive Tunisian culture uniquely infused with Maghrebi, Arab, Mediterranean, and European influences.

Touring the three Star Wars tourism circuits in Tunisia is unquestionably safe. The geographic areas in and between the three circuits fall well beyond official travel advisory locations. Petty crime targeting tourists is rare. The Tunisian proclivity to embrace, accept, and protect international visitors is both genuine and ingratiating. Although the threat of a terrorist event in Tunisia is a sustained possibility, the overwhelming majority of Tunisians interpret terrorism to be in direct conflict with Tunisian ideals and values. Out of an abundance of caution, visitors to Tunisia should register with their respective embassies in Tunis.

International media outlets—especially since the cluster of horrific mass-casualty attacks in Tunis and near Sousse in 2015—routinely paint Tunisia as a hotbed for unchecked radical Islamic extremism. This perception is fundamentally false. Pivotal security developments since 2016 to thwart Islamist activity in Tunisia—the only democracy to emerge from the Arab Spring (2011)—continue to drastically minimize the probability of future large-scale terrorist attacks inside the country.

The current security challenge posed by the two organized Islamist groups based in Tunisia—AQ-aligned Katibat ‘Uqbah Bin Nafi’ (KUBN) and ISIS-linked Jund al-Khilafah-Tunisia (JAK-T)—mirrors a low-impact insurgency combating Tunisian security forces rather than a protracted terrorist campaign. The two militant groups, relatively small in number with no capacity to seize control of any populated territory, operate autonomously in northwestern Tunisia, primarily in isolated mountainous areas in the Kasserine and Kef governorates. Separately, ISIS-inspired/politically motivated small-scale “lone-wolf” attacks occur infrequently in Tunis and other main cities, predominantly targeting security/military targets, patrols, and checkpoints. The probability of a single-actor attack in Tunisia is no greater than the rate of such attacks in regionally adjacent European countries.